This is the summary page for the process of designing and building my Scion xB EV conversion. 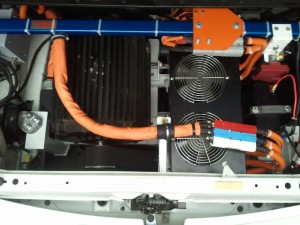 I am using the Solectria AC55 motor and UMOC445TF inverter.   This is an older, surplus system that was originally designed in the late 1990’s by Solectria (later known as Azure Dynamics) Corporation.   The system and similar variants was used in Commercial conversions of light trucks and buses and was also made available to DIY converters.   Mine is a surplus system I purchased used.   Refer to my Scion xB EV – Motor and Inverter page for details, specifications, and restoration of this system. 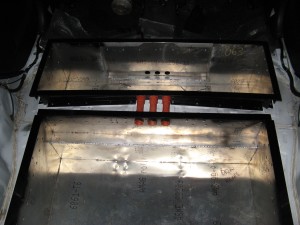 Until battery technology improves another order of magnitude in energy density,  the batteries in an EV are going to take up a fair amount of volume.  In EV conversions, the batteries are usually carried in the engine compartment, trunk, or in boxes sunken into the floor.

In my xB, the battery is carried under and behind the rear passenger seat.  The rear seat is raised about 4″ to clear the battery box underneath, but still comfortably sits a 6′ tall adult.  Sometime down the road when higher energy density batteries are available,  I will be able to remove the upper rear battery box and regain full original interior cargo volume.   The top of the lower and mid battery boxes are level with each other and are lower than the original rear cargo deck with the under-floor spare tire and jack installed.

The xB runs on a 320V, 100ah battery.   This is a dangerous amount of voltage and stored energy.  The Battery boxes and conduit must be designed to safely contain and support the batteries, and to protect them from weather and the elements.    Refer to the Battery Boxes and High Voltage Conduit page for more details. 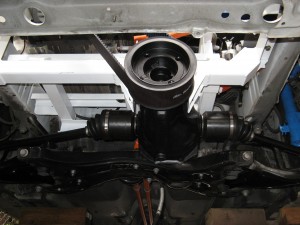 I am utilizing a “Direct Drive” approach for the Scion to get the power from the motor to the wheels (and back).  This means that the original transmission is gone, and in its place is a fixed ratio reduction.   There is no mechanical reverse gear or neutral.  The Solectria AC55 motor runs backwards just as well as forwards, and coasts with almost no friction.  The drive train utilizes a Goodyear Eagle NRG “Blue” Synchronous belt drive with 34/40 tooth sprockets, 1984 Toyota Celica GTS differential with 4.10 gears, and custom built CV halfshafts to take drive from the differential to the wheels.  By changing differential and belt ratios it is possible to adjust the final drive ratio from about 4:1 up to around 10:1.   The current final drive ratio is 4.8:1 and this seems pretty ideal for this motor/controller, a 3300 pound driving weight (me + car) and moderately hilly Seattle.   Refer to the Drive Train page for much more detail on the design and construction of this part of the car. 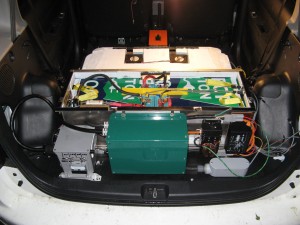 I am using a 32kwh nominal lithium battery consisting of one hundred 100AH, 3.2V nominal GBS lithium cells.   This gives me a nominal driving range of 100 miles at freeway speed under most driving conditions.

The lithium battery requires a BMS (Battery Management System) for longetivity, reduced maintenance, and reliability.   I am using an Elithion Pro BMS for this purpose.

Of course, a battery charger must also be present.   I am using a Manzanita Micro PFC30 charger.   This charger is designed for EV conversions and is very flexible, very easy to set up and is relatively compact.

Finally,  to support the capability of using public charging infrastructure I used a J1772 compatible charging plug and included the proper hardware to communicate with charging stations.

Much more detail on the Lithium Batteries and BMS page. 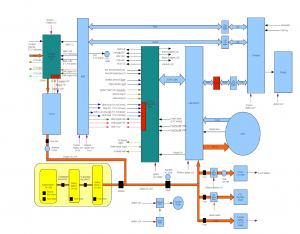 My xB EV conversion utilizes a computer-controlled inverter (UMOC445TF),  an computer-controlled Elithion BMS,  an electronically controlled charger, a drive-by-wire Prius Throttle Pedal, and will ultimately have a homebuilt “digital dash” onboard monitoring system as well.

All of these components, built at different times with different technologies need to communicate with each other at some level.   As such I spent a fair amount of time developing and building Interface Electronics to allow communication between these different components. 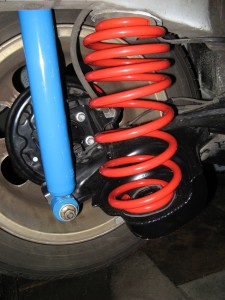 As is often the case with an EV conversion, the suspension system and steering required modification.

I converted the steering from power to manual to avoid needing to integrate a power steering pump and because it is simpler and I do not need the power assist anyway.

While this is a lithium conversion,  my rather large 32kwh battery, centered over the rear axle, still weighs about 500 pounds more than the full gas tank would have weighed.   As such,  The rear axle required heavier springs, and also modification to clear the rear battery box.   Read more on the Suspension and Steering page. 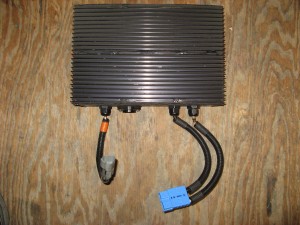 In an EV, the DC to DC converter replaces the alternator.  It keeps the 12 volt battery and headlights, fan, wipers, radio, and other 12 volt systems of the car running.   It is powered by the traction battery.

I bought a pair of Solectria DC750 DC/DC converters along with my UMOC445TF inverter and AC55 motor.   Unfortunately neither were operational.   I ended up gutting one of them and replacing the internal components with their modern equivalent along with some extra care-and-feeding circuitry that would otherwise have to have been housed externally.   My resulting DC/DC is good for 40 amps at 13.7V output which makes it a good substitute for the original alternator of the Scion xB.    For much more detail, visit the DC to DC Converter page. 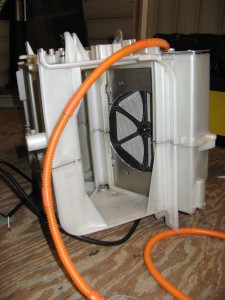 Unless you have an open top car and only drive in nice weather,  Your EV conversion will still need a heater of some sort.    There are several options for doing this.

One of the the least expensive ways to accomplish this, but at the tradeoff of a fair amount of work to disassemble the dashboard far enough to get the heating distribution box out, is to buy a small household ceramic space heater and use the heating elements in place of the original automotive heater core.   This is the approach I used.

Refer to the Heater page for much more detail on this. 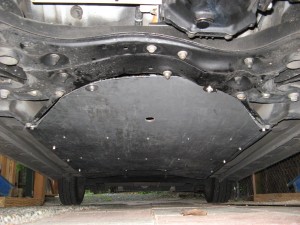 It has been almost a year since I got the scion running, and in that time I have made some Aerodyamic Improvements which help improve range when driving at freeway speed.  Overall I figure the cumulative effects of all the aerodynamic modifications vs. a stock xB might give me 10% reduction in drag,  but it is hard to say without far more scientific measurement than I have the inclination to do.