This page discusses design and construction of the battery boxes and high voltage conduit in my scion xB EV conversion.

Battery boxes have a couple of purposes.   Of course,  they contain the batteries, but there are several other purposes as well.  Depending on the quality of the conversion and the system voltage,  the batteries may be largely exposed or well contained.

There are several functions that battery boxes have:

In many lower voltage, and older lead acid conversions, such as my old MR2,  the batteries were supported on open racks.  In the MR2, they were made of angle iron.   The racks were very strong, but did not protect the batteries from the elements so they got wet and dirty during winter driving.   This was not a major deal from a safety perspective as the batteries were not in the passenger compartment of the car, the terminals were insulated, and the overall system voltage was relatively low (126V) and thus not terribly dangerous.   The major disadvantage of that design decision not to enclose the batteries however was that the car was substantially affected by cold weather, which caused the batteries to have lower usable capacity and power.

In higher voltage conversions, such as my xB, and in any conversion where the batteries are located in the passenger compartment of the vehicle (like my xB) the batteries need to be contained for safety reasons.   320V can be deadly.  Also,  in learning from the MR2,  I wanted to have at least superficial insulation from extremes in temperature and better protection from the elements for the batteries in my new conversion.    This meant I needed fully enclosed battery boxes.

In order to enable a 100 mile range, I wanted a quite large for a conversion (32kwh) battery pack.   (Most EV conversion using lithium have a battery capacity from 10 to 16kwh).    This meant I needed quite a bit of space for the battery, which would consist of 100 GBS 100ah lithium cells.

A good policy with any EV conversion is to build the battery boxes as large (width, length, and depth) as possible.   This allows for maximum flexibility in the size, shape, and configuration of batteries to be installed.

As it turned out,  without losing the back seat,  there was only barely enough room to get my desired battery pack into the rear of the xB.  As it is,  I had to sacrifice about 10″ of depth behind the rear seat back in order to hold the last 24 cells, which would not fit below the floor level.

battery box raw materials. Metal supply houses will usually cut to size relatively accurately and this saved a lot of time and improved quality of outcome.

rear battery box prior to install of flanges.

mid and upper battery boxes, prior to installation of flanges

mid battery box, painted and ready to go. I had problems with the paint on this one same as the rear battery box.

rear battery box, painted and ready to go. Paint is black engine paint, but ended up grayish due to cold weather, I think. Also the orange paint used for stencils reacted with the black paint even after drying and oozed badly. 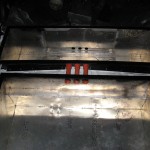 
The battery boxes for the xB are made from .063″ 6061 aluminum sheet.  The main boxes are welded and the flanges and other protrusions are made from 3/4″ and 1″ aluminum angle, riveted in place.

The setup is such that in the future if and when higher energy density batteries are available, I should be able to remove the upper battery box and regain full interior storage space.

I could have made the boxes 1 inch deeper, and in retrospect this would have been beneficial as I would have had additional options in my cell selection. However without cutting into structural members it is impossible to make battery boxes for the scion xB any wider or longer in the locations I put them.

Note: while it was possible to weld the edges of the sheets of aluminum as I did,  it was difficult due to all the heat expansion.  It would have helped to have better jigs.   Also, trying to weld in the middle where flanges are installed only caused major warping, as is visible on the bottom of the battery boxes where I tried it.   (The warping is ugly, but should not affect function).   I switched to rivets after that. 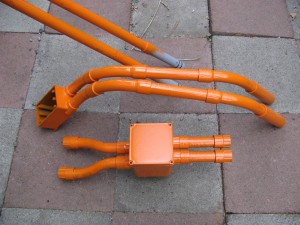 The battery boxes are located in the mid/rear of the xB.    The motor and inverter are at the front.   This means that high voltage, high current wires need to run from the rear of the car to the front.  These need to be protected from the elements and from contact with people for safety and reliability reasons.

I routed the conduit down the center tunnel section of the xB underbody, where the exhaust was originally routed.   This keeps it recessed on the underside of the car to reduce damage risk, and also keeps it out of the passenger compartment.

I used commonly available marine grade gray plastic electrical conduit and junction boxes for this purpose , as found at any hardware store.   It is relatively inexpensive, very durable, and easy to work with.   I painted all exposed areas orange, to indicate high voltage to first responders. 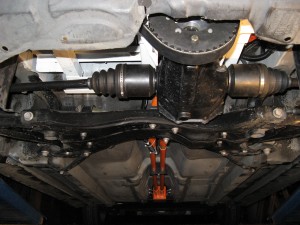 The conduit runs in two parallel sections from the mid battery box to the junction box beneath the main circuit breaker, then in two parallel sections from there up to the junction box in the engine compartment.   This means that in order to cause a short circuit, both conduits, and the insulation on both 1/0 cables within, must be compromised.   This is relatively unlikely.    Shorter sections of the same type of conduit run between the mid and lower rear battery boxes.   A third conduit is in place to route the charger wiring.  Again, the conduits are separated for safety.   If I were to do it again,  I would add two more conduits for other ancillary wiring.

Most of the conduit sections are off the shelf and simply cut to length.  A few in the engine compartment and between the mid battery box and breaker junction box I had to reshape with a heat gun to fit.   I also modified several conduit and sewer pipe fittings using my South Bend 9A lathe to make the connectors to attach the conduit and junction boxes to the car body and battery box sheet metal.    I used slip couplings in the long run section between the front of the car and the breaker junction box to allow easy assembly and wire routing. 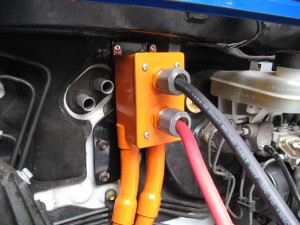 The conduit is supported at points where the junction boxes attach to the car body and also with a couple of plastic brackets custom made to support the conduit and attach to existing mounting points on the car body underside. 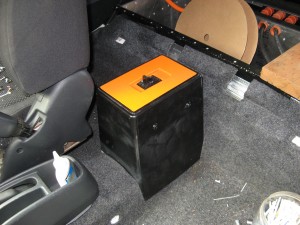 main breaker with trash can cover in place.

One major safety component that should be present on an EV conversion is a mechanism to disconnect the battery from the rest of the car.   This should be possible to do from the driver’s position in the car.   It is especially important on a DC conversion where a shorted controller can cause a runaway,  but it is also a good idea on an AC conversion, as while a shorted controller power section cannot cause a runaway,  it can still cause serious damage if it were to occur, and while the odds are vanishingly small in a well designed conversion, a fault of the right sort with the throttle signal or within the controller could still theoretically cause a runaway condition. 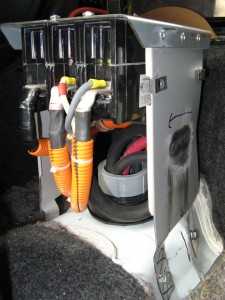 main breaker installed, but without trash can lid. Smaller wires go to charger. This is the load end of the breaker.

In my car,  I am using a 3 pole, high voltage DC rated circuit breaker.   This breaker is a 225A continuous current thermal magnetic breaker.  It has a 500VDC direct current rating.   The magnetic trip rating is adjustable.   It is big at about 4″ wide, 6″ long, and 3″ deep, but not too big to use in the car.   I purchased it surplus from a local marine/industrial supply house called hardware specialty.   SImilar breakers can be found on ebay.  These breakers have original retail prices in the thousands of dollars, but can be found on ebay for a couple hundred.

I think breakers such as this were originally meant for large battery backup functions, such as at a data center or telephone exchange. 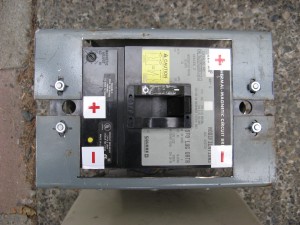 My particular breaker is Square D  model KHL36225DCxxxx.    The last four digits seem to vary but can be omitted for the purpose of searching.    Note that there are many similar breakers rated for 250VDC,  but the 500VDC ones are a bit rarer.  They can be identified by additional stickers stating the higher voltage DC rating.   These breakers are available with many current ratings from about 100A up to 250A.     Given the high magnetic trip rating and thermal characteristics a breaker like mine should be OK in a car that can intermittently pull 500 battery amps, which at 320v is around 200 horsepower.

This type of breaker can be found with a remote trip/reset and undervoltage trip options.  While both options could theoretically be useful in an EV I found that these got in the way with mine, and I had to disable them.

I made a metal bracket to hold the breaker over the tunnel cover in the middle of the passenger cabin where it is reachable from all seating positions.   I used my shop trash can (ex boeing fireproof fiber reinforced plastic), turned upside down, as a cover for it, as seen in the pictures.