This page discusses the steering and suspension changes made during the EV conversion. 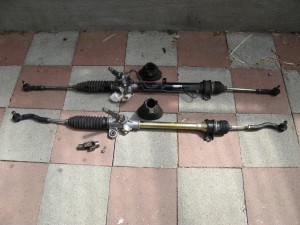 All versions of the scion xB come with power steering standard.   Power steering requires a power source to operate.  In the xB it is powered via a belt from the engine.  Obviously,  this approach would not work after the conversion.

Electric power steering pumps are available and can be retrofitted to other power steering racks.   The 2nd generation Toyota MR2 power steering pump is often used in EV conversions for this purpose.   However, this still requires a high power 12V circuit to operate and adds noise and considerable load to the DC/DC converter, as well as slightly reducing overall efficiency, and increasing complexity.

Not all cars have manual steering, and it is becoming hard to find on modern American market cars. It turns out the 2000-2005 Toyota echo, which shares most of the mechanical underpinnings of the scion xB, was available for a few model years with manual steering.   By researching on rockauto.com and ebay,  I was able to discover that the power steering rack for the 2000-2005 echo was the same one as for the 2004-2006 scion xB.   This meant that the manual steering rack from the Echo should also fit the xB.

I purchased a 2000 toyota Echo manual rack from a wrecking yard in Fife,  and as it turned out it was a bolt-in fit for the xB.   The only gotcha if doing this conversion yourself is to ensure you get the rack-to-body rubber boot and the steering shaft linkage between the universal joint and steering rack, as these are different between the manual and power steering racks.

This was the easiest part of the whole conversion, and there is not much else to say.  The replacement of the steering rack (and all the other suspension work) did necessitate eventually getting a front end and steering alignment done.

With 50psi in the tires, and basically stock weight up front, steering is easy even with the manual rack.

The Brakes in an EV conversion typically don’t have to change much, especially now that lead acid is no longer typically used (which would often blow past the car’s GVW possibly necessitating bigger brakes).

The only thing that is typically necessary with modern cars is to provide a vacuum source to replace the engine vacuum to power the brake booster, if the car has power brakes.   This is pretty simple to do as there are brake vacuum pumps made for supercharged, turbocharged, and diesel vehicles, all of which do not produce much engine vacuum.

I used a Hella 009428081 (ebay or amazon) brake vacuum pump coupled with SSBC (stainless steel brakes corporation) 28146RE relay and 28146SW Vacuum Switch (ebay, summit racing, etc).   I needed a one way vacuum check valve with low cracking pressure (ebay HHO wackos have them) as the Hella pump does not hold a vacuum when not running, but otherwise this setup works very well, and the Hella pump is extremely quiet, especially compared to SSBC diaphragm-type pump which is what I used on my old Toyota MR2 EV conversion.   While not audible when driving, at slow or stop the SSBC vacuum pump was very loud.   You can barely hear the Hella pump (OEM on certain Audis and VW’s) when the car is at a stop.   Note that a special relay such as the SSBC 28146RE needs to be used as it has a delay function built in so the pump will continue to run for several seconds after the vacuum switch turns off.  This allows the pump to draw a full vacuum and prevents rapid cycling.

The last component to be made is simply a vacuum reservoir to include in the vacuum circuit.  This allows for the pump to cycle and run less often.   It can be made from a short section (12″ or so)  of 3″ or 4″ ABS sewer pipe with end caps and a hose barb to hook a vacuum line to.

The xB had 148K miles on it, and the front shocks and many of the bushings were getting tired.   I installed new front A arms (with new bushings), new ball joints, and new Tokico struts.  I re-used the TRD springs that came with the car, as the front end weight was not changing appreciably from stock.

I did have to remove the front sway bar, as the attachment points on the A arms conflict with the larger-than-stock CV joints on the new axles.    This does not seem to have appreciably affected the handling.

The rear axle required more work.    There were two things that needed to change.   The first was that the rear end of the car now had the batteries and would need heavier springs.   The second issue was that the battery box width required modification to the spring supports to increase clearance.

conflicting portion of spring hanger, to be removed

reinforcment to spring hanger after trimming inside edge

The inner edges of the xB rear axle spring perches conflicted with the battery box.   The spring perches did not need to be as wide as they were,  so I trimmed about 1.5″ off of the inner edge on both sides.   I then welded new reinforcement along the bottom of the perches to maintain strength.    You can see the progression in the images above.

It is worth noting that solid axle beams like the xB are designed to twist and flex.   This means it is dangerous to cut or weld on the actual beam portion of the axle, where the flexing occurs.   However,  it should (hopefully) be safe to modify the support arms at either end as I did.

I reinstalled the axle using urethane mounts to replace the original rubber ones.   This will help with rigidity and is necessary since there are places where there is less than 1/2 inch of clearance from the axle beam to the battery box.

While still within the original GVW as an EV (unlike my old MR2 which blew past its GVW in the conversion)  the xB would sit very low in the back without doing something about the springs, to level out the ride.     This is because the net weight gain in the back due to removal of the fuel tank and addition of 700 pounds of battery is about 600 pounds.

I spent a fair amount of time researching what springs would fit the xB.   There are aftermarket air bag spring helpers that are available, but I did not want to have to deal with something like that which requires an air source, topping off, and is probably not reliable long term.   Nobody makes actual overload springs for the xB that I was able to find.   There are many lowering springs, with heavier spring rates, available but those would not be adequate.    I spent time in wrecking yards trying to find compatible springs on unrelated vehicles.   The closest I came were front springs on certain honda accord/prelude/civic models from the early 90’s.  These had the right spring rates and spring end diameters, but were straight, not barrel, springs and were too long.

I initially tried a set of rear 2nd generation TRD xB lowering springs (seen in the picture above) but these still sat too low.  However,  2nd generation OEM rear springs turn out to be a perfect match with the 1st generation TRD front springs and the extra battery weight in the back.

If I had a 300-400 pound battery,  the 2nd gen xB lowering springs would be about perfect.

A note about progressive springs. This type of spring is softer for the first several inches of its travel, and then stiffens up. Most street lowering springs are progressive design, so that they still maintain similar free length to the OEM springs they replace. This means they still sit lower than the OEM springs despite their higher spring rate, which is measured for the straight section once the progressive section is mostly collapsed. This is why the OEM xb2 springs I finally settled on sit higher (about 1.5″) than the xb2 TRD springs I initially tried despite the TRD springs having a 20% higher spring rate.

There are MANY aftermarket brands of lowering springs for these cars that I did not include in the above list as they would not be useful in an EV conversion with added weight.