This is a picture of me sitting on the MKI. My friends Hal and Joe had come out to watch me try to drown myself, and to give riding it a shot. Hal tried first, and capsized the bike in about 4 feet of water. Joe was able to balance it but dared not venture far from land. Did I mention this was in January? Note the drillings to lighten the frame, and the streamlining of the styrofoam. 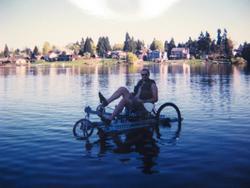 The MK1 on the water

Yes, it did float. This is a picture of me on the MK1 Amphibike probably in 1999. At the time, I still had unfinished styrofoam floatation. At the time I probably had one of my propeller drivetrains installed, but I can't tell which from this picture. 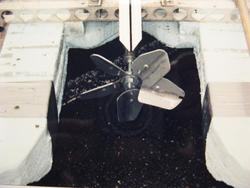 This is a picture of the first propeller I installed on the MK1. It was homemade. The hub is part of a bike sprocket, and the blades are bent aluminum. It worked, but cavitated badly. I replaced it later with a stainless prop (very heavy, but worked great except that it was bent and thus imbalanced). The bent prop was later replaced with an aluminum prop off a stern drive. That prop has worked well, and is now installed on the MKIII. Despite its drawbacks, the homemade prop was a big improvement over the wheel-paddling and paddle wheel phases. The big drawback that all the prop drivetrains had on the MK1 was that they could not be disengaged when outside of the water. I seized up the nylon bearings more than once from riding too long out of the water. 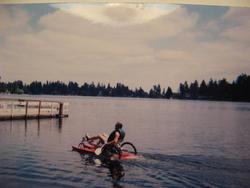 The MK1 on the water

Still floating! This is a picture of me on the MK1 Amphibike probably in 2000 or 2001. At this point I was nearing the final revision of the MKI, with its final propeller drivetrain and fiberglass pontoons. The new pontoons made the bike heavier than with the old styrofoam, but they were much more hydrodynamic and thus gave me a blistering 3-4mph in the water. The paddle I am holding was a constantly-carried backup in case of mechanical breakdown. Oddly I don't think I have ever needed it. (Yet) 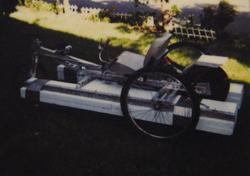 The MK1 with paddle wheel

This is an earlier picture of the MKI, with its short-lived paddle wheel drivetrain. It was very splashy and not much more effective than the knobby mountain bike tires. The best way to go was to run both the tires and paddle wheel in the water. This had the down side of getting me very wet. The paddle wheel also did not freewheel or disengage, and its inertia caused problems pedalling when out of the water. Note also that at the time I had not done any streamlining on the styrofoam floatation. 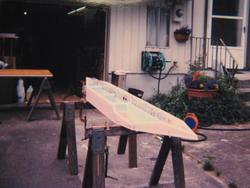 This is a picture of one of the original fiberglass pontoons while under construction. In this picture, there has been no fiberglass applied yet. The framing made from styrofoam insulation board with an aluminum backbone is clearly visible. There were multiple watertight compartmenst as you can see. I coated both the inside and outside surfaces with fiberglass resin laminate. The pontoons came out rather heavy, at about 30 pounds for the first one, and 20-ish for the second (I was getting better at using less resin). They proved absolutely reliable, I never had to perform any maintenance on them.