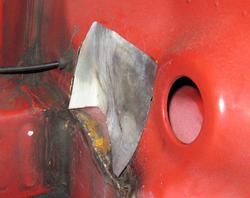 Cold-worked patch fits well enough to be tack-welded into place before heating to form it the rest of the way. 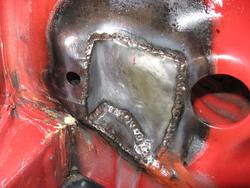 As is obvious from the picture, I will need to make some minor chassis modifications to allow the rear battery deck to fit into the engine compartment in the position I want. Specifically, I needed to reshape the lower corners of bulkhead between the engine compartment and the trunk to allow the rack to move rearward by one inch. There were only a few square inches of metal interfering with the fit on each side. I could (in a neanderthal moment) just bash it in with a hammer, but I want a nicer looking result that that would achieve. I cut out the offending sections and welded differently shaped pieces over the holes to allow clearance. I also modified the hood latch bracket to remove one of its three mounting bolts that would otherwise interfere with the batteries. I decided that it will still be strong enough with just two bolts.

Due to the very minimal sheet metal changes in the rear compartment, strength and safety should not be compromised as a result of my modifications. I did reject some earlier battery placement ideas though, because they would have required removing some crash safety catches that stop the rear hood from coming in through the rear window in the event of a rear-end collision. Safety first.

As for actually making an irregularly shaped metal patch with compound curves and such, what I found worked the best was to start with a (suprise) cardboard mockup, then once I found the right shape, use that to cut a piece of metal that matched the flattened-out cardboard shape. Then I cold-bent the major features of the patch, such that I could weld it in place at a couple corners. Once I did that, I used a large propane torch to heat the patch red-hot, making it ductile enough that I could pound it the rest of the way into fitting the irregular hole. Making this irregular shape would be nearly impossible by cold-working the metal on the bench, but tacking it into place just enough to use the car body itself as the jig for forming it worked quite well.

Welding it in required that I remove all the paint from the patch and the car body surrounding it. I used a torch to cook the metal until it just started to get red hot. This reduced the paint to a white ash. After it cooled the ash cleaned off easily with a wire brush. Welding all around the patch was rather delicate to do due to minimal overlap of the patch with the original metal in a few places, and the fact that the metal was quite thin, but I managed to do both patches without burning any huge holes in anything. I did use some body filler to patch some areas where the welds did not fill in completely, just to keep water and dirt out.

All the pictures are of the passenger side patch. The driver's side patch required the same process to make. 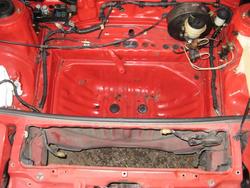 Closer view of the two compartments 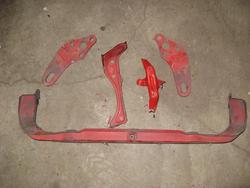 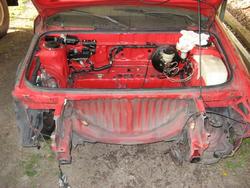 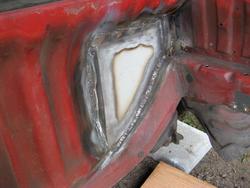 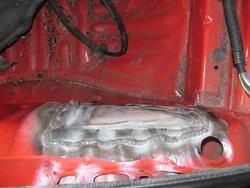 Inside view of modified bulkhead

The front of the car required some significant modification to accomodate the Two front EV Battery Racks that will be installed.

The first of the two front battery rack will go in the front trunk bay. This area used to carry the spare tire and some air conditioning and other systems of the car. (If I choose to carry a spare, I will relocate it to the rear trunk). The chassis modification will allow me to install a rack that holds 5 traction batteries. Without modification I could only fit three. The modifications are similar to those I made to the rear bulkhead: I trimmed away a formed section of metal on the bulkhead, and replaced it with a flat piece to allow enough room to accomodate the battery rack. I also removed the spare tire bracket and reshaped (OK, hammered flat) some protruding sections of metal along the back of the tub.

The second, smaller front battery rack goes where the radiator and cooling fans used to be. I modified the upper front bumper cover support to make it possible to remove and install the batteries on this rack. I removed The old radiator support crossbar as it was in the way of where the battery rack goes. Neither of these supports are structural, so these modifications will not affect the strength of the bumper or front of the car. In fact, with the battery rack in place, the front of the car will probably be substantially stronger than original. As an aside, I could probably have fit three batteries into the frontmost section of the car if I were to turn them 90 degrees, but that would not allow for adequate crush space in the event of a front-end collision, so I am sticking with just two in this compartment. 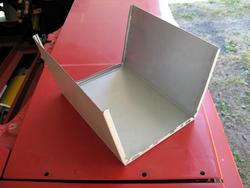 piece of computer case to become the charger bay 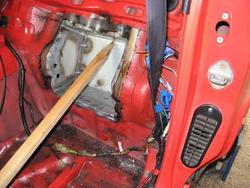 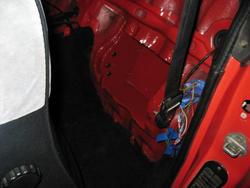 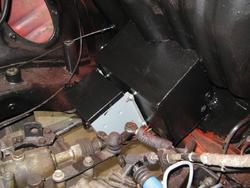 charger bay from the engine compartment, with boost transformer.

My Russco EV Battery Charger (see EV Electronics discussion for more details) needs to be located in an accessible place. Due to the fact that I have crammed so many batteries into the car, there is no place for it to go in either the front trunk or engine compartment areas. I could not mount the charger in the tunnel area of the car since it has adjustments, fuses and a gauge that need to be accessible. This left me with two options: The trunk (which I want to be kept clear of all EV components) or a location inside the passenger compartment.

The only way to fit the charger into the passenger compartment without limiting seat adjustability was to cut a hole in the rear wall of the passenger cabin, and make a recessed charger bay. This bay protrudes into the engine compartment, ahead of the transmission and below the rear EV Battery Racks. This space was made available in part due to the fact that I re-routed the clutch hard line and flexible lines as part of my EV Transmission Modification.

Once I located the right spot, it was just a matter of making a metal box of the right size (allowing sufficient air gaps for cooling and wires) and welding it into place in the hole cut for it. I used the sheet metal top off of an old computer tower case to make the box, since it was the same gauge of metal as the original car body, and the top gave me three of the five sides of the box pre-made. It took considerable torch work and a lot of fussing about to make a flange that conformed to the irregular, formed surface of the rear bulkhead in the MR2. It did not come out all that pretty, (plenty strong, just not pretty) so I just bondoed over the welds to enhance appearance a bit before I painted it. I will cut a hole in the rear carpet of the car so that the charger will be accessible. Waste heat from the charger will help heat the cabin on cold nights, and that should help reduce my need to use the toaster heater. 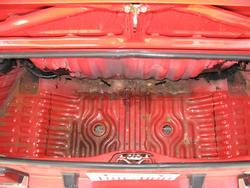 Trunk floor of MR2 with hole to be cut traced out

The original 17-battery configuration for my car left the trunk completely free of batteries and EV electronics. Achieving that was one of my design goals. After about 1500 miles of driving, I decided to perform a Range and Performance Upgrade to the car, to correct a battery selection goof. This upgrade consisted of adding four more batteries, and the only place they could go was the trunk.

The only chassis modification necessary for adding a fourth EV Battery Racks location was to locate and cut a big hole in the trunk floor, so that a sunken battery compartment could be installed. By making a sunken compartment, most of the original trunk space is still available. The battery rack that I installed hangs about 6" below the floor of the trunk, meaning that I sacrificed about 6" of trunk depth to do this, however there is still plenty of room for backpacks, groceries, or other smallish cargo. I think the trunk is still bigger than the useful space it had before I pulled all the original trim out of it. As part of the process of preparing the trunk to carry batteries, I coated it with the same type of urethane truck bed liner I used in the other compartments.