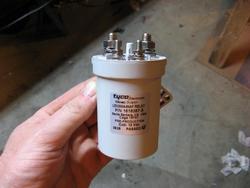 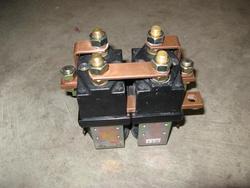 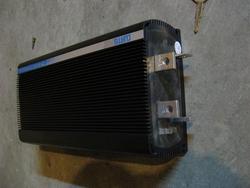 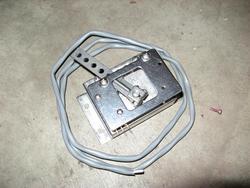 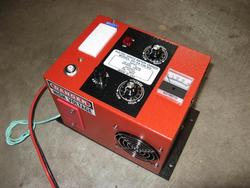 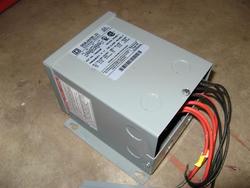 The Motor Controller is essentially equivalent to the carburetor or throttle body on a gas car. It regulates the power going to the motor. Without getting too technical, it does this by rapidly switching "on" and "off" (Pulse-Width-Modulating) the power going to the motor. More throttle means more "on" time and less "off" time. This is a very efficient method of controlling large amounts of power. For example, this controller (A Curtis 1231C) is rated at 144v and 500A. This is quite modest by today's EV standards (read up on Zilla Controllers) but this is still nearly 80KW of power, or a bit over 100 horsepower (746 watts == 1 horsepower) to the motor on an intermittent basis. That is equivalent to the energy used by eight hundred one-hundred watt light bulbs, or enough power to light most of the immediate neighborhood.

The controller needs a throttle input. This function is performed by a Curtis PB-6 potbox, which is simply a 5K-ohm variable resistor, mounted in a housing that can be mounted somewhere and attached to a throttle cable. It includes a zero-throttle switch, which sends a cutoff signal to the controller. There are more sophisticated, hall-effect (nothing mechanical to wear out) senders as well, but these are typically mated with the fancier controllers as well. I welded up a custom bracket for my potbox to mount it just on the other side of the bulkead from the gas pedal, so a simple, straight rod will connect the two together.

Any practical car needs a heater for defrosting and some comfort on colder nights. I used a "chefmate" brand toaster to build my EV Toaster Heater. There are also more sophisticated (and expensive) options available.

A charging system is necessary to replenish the EV Traction Battery after driving. There are two basic kinds of systems: Onboard and External. Onboard systems are usually slower to charge and come with a weight penalty, but have the advantage of always being there. External systems can usually charge faster, but your charging options are limited to whereever you can find the right kind of charger. This is a big problem for people who have production electric cars from the late 90's with inductive paddle chargers. Some have taken to "portableizing" their external chargers so that they can carry them along. I chose to use a simple, relatively inexpensive Russco 24-120 onboard EV Charging System. For my setup this consists of the charger itself, and (for when I go to a 136v battery) a boost transformer.

Manzantina Micro is another manufacturer of chargers. Theirs are very sophisticated, but in my case more than I needed. Zivan also makes chargers usable for onboard systems but they must be configured by the manufacturer.

There are several big contactors in my car. The one that you will always see in any EV is the Main Contactor, which is essentially the on/off switch for the motor and controller. My car also has a reversing contactor for the electronic reversing. There are also a couple of somewhat smaller contactors for turning on and off the EV Toaster Heater and the DC-to-DC Converter.

Tyco Electronics and Albright make contactors appropriate for switching the kind of power seen in an EV Traction Circuit. I have a couple of smaller Magnecraft contactors for switching smaller DC loads.