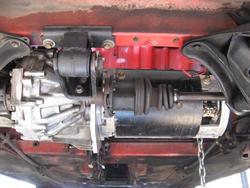 Motor in the car for the first time for test fitting. (bottom view)

The above pictures are of the motor and transmission after final assembly, and after final installation. The assembly weighs about 250 pounds, so I used the shop crane to move it into position to install it. The mounts I made include lifting eyelets on both ends, to allow easy lifting with the shop crane. The engine compartment of the car was modified as well (see the Chassis Modifications page) as were the motor mounts (See the Custom Motor Mounts page) as part of the work for preparing to install the motor and transmission. 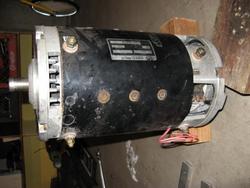 I am using an Advanced DC 9" Motor in my Toyota MR2 EV conversion. This motor is a series-wound, direct-current motor. This is the most common type used in EV conversions. Its maximum input voltage is rated at 120V, though everybody in the EV community says 144v is fine. I'll be using 136 volts. The maximum safe RPM is probably around 5000 RPM. This is a bit lower than the redline on the original engine, but still plenty good enough.

The Advanced DC 9" is a rather large motor for the size of the car (This motor can be used in full sized cars and pickup trucks). I have my reasons for doing this, as detailed below. Advanced DC makes several other smaller models of motors as well. Another common maker of motors for EV conversions is Netgain/Warp (See the EV Reference Material page for links). Those are basically slightly souped up versions of the Advanced DC models however. Motors made by GE, Kostov, and a bunch of other makers have also been used in EV's, but these days there are enough purpose-built models that I think one should really stick to them.

Depending on what you are converting, you may have space limitations or other requirements that limit your choices of motor. In my case, there is plenty of room in the MR2 to install basically whatever motor I wanted.

My Motor has a tailshaft, which may be useful in the future for driving an accessory or installing a kicker motor that is more efficient for low power operation, or a regen system, sensors, or whatever.

If you've been reading anything technical about EV's (including my own rules of thumb listed on the EV Performance Analysis page) you might have concluded that I should be using an Advanced DC 8" or some other similar smaller motor. Indeed, that motor would perform quite well in this application, and I would have saved about 20 pounds of weight by using it. Why then am I going for the larger, heavier Advanced DC 9" motor? There are several reasons I decided to go this route:

EV parts suppliers all sell a variety of motors. These include DC motors like mine, AC motors, Permanent magnet motors, and specialty motors. Keep an eye out on ebay and other internet venues for a motor. Any industrial parts supplier might have a motor kicking around, but make sure it will work for you if you buy one from one of these guys. And of course, don't forget to poll the local EV community and find out who has a garage full of parts to sell. The last method is how I got mine. The last method has a major advantage in that you get to lay your hands on a motor before buying it (especially important for used parts), and there are no shipping fees if you can pick it up yourself. These motors are heavy so shipping one is going to be expensive.

Preparing It For Use

My motor is used, but it does not appear to have very much mileage. The seller insisted it had only ever been bench run. While I agree that the usage is minimal, I suspect it has a bit more usage than that. Nonetheless, there is nothing wrong with it, so I took it. I will clean it up a bit and repaint the housing as it is a bit weathered. I will take out all the brushes, clean the commutator, and put everything back together using conductive grease where appropriate. Other than that, there is not much to do with the motor. Especially compared to the sort of maintenance you would expect to do to a gas engine.

You can also get AC (Alternating current) motors and permanent magnet motors that may be suitable for EV usage. I'll touch on them briefly here, but I'm not using these so there won't be much detail other than the reasons why I did not use these.

AC motors work great in EV's but are much more expensive than their DC counterparts, and they require complicated, specifically-designed controllers, so they are usually sold together with those. AC motors are what is typically used in factory-built EV's. If you want to build a direct drive car (Eliminating the original transmission) then you will want to go with an AC drive system. AC motors function well at the high RPMs (up to 10000 RPM) necessary to allow for direct drive to be practical.

Most permanent magnet motors one can find aren't big enough to propel a full sized car at freeway speed. There may be other drawbacks. For example, the permanent magnets will continuously collect ferrous junk that blows into the motor. With an series wound motor, as soon as you start coasting all magnetism goes away and any ferrous dust will get blown out. Some permanent magnet motor designs such as "pancake" motors (used on electric motocross bikes) are very powerful for their size, and extremely efficient, but they have a low RPM limit of about 3000 RPM due to their armature design which uses very little or no iron. I initially considered a direct drive design using two Perm 132 pancake motors, but I abandoned plan this due to the RPM limitations of the motors which would have forced me to accept either very poor acceleration and no hill climbing ability, or adequate acceleration, but a top speed of 35mph. Also, most permanent magnet motors aren't rated at as high of an input voltage compared to series DC motors for whatever reason.

This is a custom part (actually two parts) that must be created to attach the chosen motor to the transmission of the car. The EV adapter plate is usually the only high-precision custom part that must be made when performing a typical EV conversion. Therefore, it is critical that this part be made correctly. This part will have to be fabricated specifically for your combination of motor and transmission, unless you are converting a commonly done car, in which case it will be possible to order off for a plate. Expect to spend a fair amount effort here to get it right, and unless you are a machinist, plan on having somebody else do the work.

The plate is a sturdy, usually flat metal plate that mates the electric motor of the car to the original transmission by matching the bolt pattern of the transmission on one side, and that of the motor on the other side. It must hold the motor shaft in exact alignment with the transmission shaft. 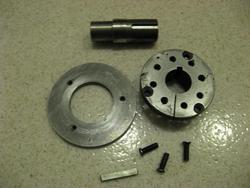 A typical motor used in EV conversions (such my ADC 9") will have a 1.125" straight shaft with a keyway. The adapter hub is necessary to mate the straight shaft of the motor to the flywheel, which was originally intended to bolt to a flange on the end of the crankshaft of the engine. The hub must mimic the back of the crankshaft, and sit at the same position relative to the transmission as the original crankshaft flange did. The picture to the right is of the adapter hub that I have. Its parts include the main flange which the flywheel will bolt to, the lock ring, retainer screws, and shaft key. The short shaft at the top is not part of the hub, but was used to mount the hub in a lathe for making the needed repairs. Not shown is the shim that will align the flywheel on the motor shaft, which will stick through the end of the hub when installed.

There are a bunch of design considerations that go into creating an adapter plate for an EV conversion:

There are only a couple options here. Make one, or have one made for you. Buying one off the shelf will only be possible if you are converting a very commonly done car such as a Geo Metro or Volkswagen Rabbit. The first option here is really only practical if you are a machinist. There are a few operations around the continent that make adapter plates. Electro Automotive Inc is one. There is a company in canada that apparently does this as well. Any decent machine shop could do it, but if it isn't something they are used to doing it would probably take longer and cost more, but if you were clever enough to manufacture everything you could yourself, and leave the critical alignment steps to the machinist, you might be able to work something out.

In my case, the same person whom I bought my motor from offered to make an adapter plate for me. His price was the best I had seen, I knew he had done many of these before, and he came well recommended, so I agreed. 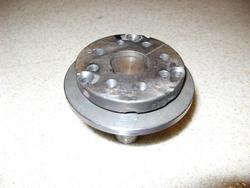 adapter hub before being repaired

adapter hub being machined by my uncle 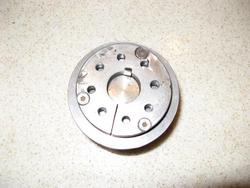 adapter hub after being machined true 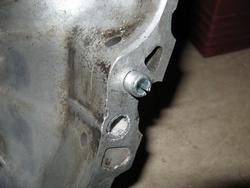 Unfortunately there were some issues with the plate that I commissioned to be made. It appears that it was a bit of a rush job as there were other higher profit things to get back to. When I pointed out some issues with the plate and hub upon delivery, it basically came down to the fact that this person felt they had not charged me enough and the job was more complex than they had expected, and thus did not want to work on it any more. I was rather annoyed but took it anyway at a reduced price. The plate and hub will be fine with some rework, but this sort of thing was what I was hoping to avoid by paying somebody to do this who had done it before. Oh well.

There were three main issues with my plate:

Given that the adapter plate for an EV is nearly always going to be a custom job, some issues are always going to pop up. I haven't been at this for very long and I've already heard lots of stories about adapter plate problems. So, it is very wise to always inspect what you are getting carefully, ideally before rendering final payment. This may not be possible if you are dealing with someone remotely; in this case make darn sure they have a return policy. If you are dealing with someone in person, don't accept an assembled unit, insist on taking everything apart and looking at it. Without doing this, I would never have found the flywheel problem until I had the unit at home and would have been unable to prove that there were pre-existing issues with it. If you can find somebody who has made this part before for your type of car, they are the best option to use. If somebody else has a conversion of the same car that you are doing, talk to them about who they used and what problems they encountered.

After making the necessary fixes to the adapter plate, I was able to actually put the whole assembly together for good. This involved:

These steps are summarized in the following sequence of pictures. 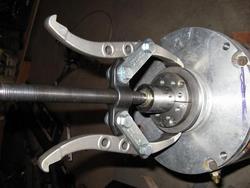 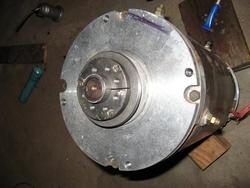 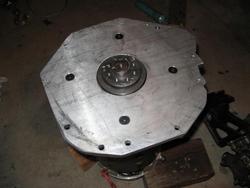 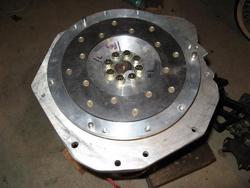 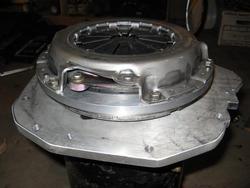 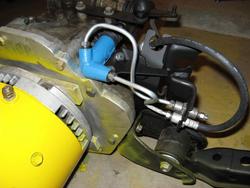 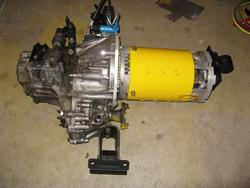 motor and transmission assembly, ready to be installed