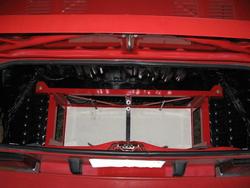 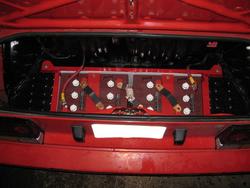 Gee, Brian. With all the planning you obviously did, why are you upgrading the car? Is it not meeting your needs? Well, as I say in various places on this site, I originally planned the car to have an EV Traction Battery consisting of seventeen Trojan T-875 golf cart batteries, for a 136V system. I goofed up in that those batteries were not available with the terminal types I needed, and had a different terminal configuration that would have required me to wait months for the right batteries, and rebuild all my cabling. So I installed a 102v battery pack with seventeen T-105 golf cart batteries for a 102v system. The range was the same (if not slightly better) than the 136v traction battery would have given me, but the top speed and acceleration were a bit lacking at freeway speeds. (Usable, but not what I planned for). So, I chose to upgrade the car.

My only options to fix the performance problem were to:

In both cases, I would need to re-install the boost transformer into my EV Charging System, and re-install my original Intelipower DC-DC converter, that I had pulled from the car since it would not run on 102VDC. No cost here except time, since I already have these components.

As it turned out, the decision was basically made for me when I got the opportunity to buy four additional Trojan T-105 batteries that were in new condition, and nearly exactly the same age as my current ones, for about one half of retail price. I bought the batteries in a heartbeat, and this sealed the deal as to which direction I will be going: a 21 Trojan T-105, 126v EV Traction Battery. The car will still be a bit slower than it would have been with the 136v 17-T-875 pack due to higher weight and lower voltage, but it will have about 25% more range and should easily cruise at 65mph if I want to go that fast. By building a sunken battery box, I will only lose about 6" of trunk depth, so it will still be usable for groceries, my tool box, and other smallish cargo.

The basic steps in this upgrade process are:

This work was complete as of March 16th, 2008. I took a short drive around the neighborhood to make sure everything was working, which it was. I haven't tried out the new top speed yet, but at least in 3rd gear it was still happily accelerating at 50mph, while before the upgrade 50mph was the maximum speed for 3rd gear. I expect it will easily hit 70mph now in 4th, whereas before it topped out around 60. Despite the extra weight, the car now can climb the steep local hills 5 or 6 mph faster as well. Handling still seems alright, despite another 250 lbs of weight in the back.