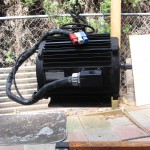 I was able to find most of the original documentation online a while back.  Thanks to ‘metadope’ for originally hosting these documents, however their site seems to have changed hands.  I am now also making these original documents available should anyone else be using or repairing this equipment. Hopefully since Solectria and Azure are out of business and liquidated, and this is obsolete equipment, whomever has the copyright rights will not care.

See the Wikipedia Article regarding Azure Dynamics, formerly Solectria. Azure was active in the EV drivetrain and commercial electric vehicle market from the mid 1990’s through 2012. They designed and sold drivetrains, and also built and sold small volumes of complete vehicles, ranging from experimental cars (Solectria Sunrise) to small passenger cars that were probably their most successful (the Solectria Force) to Chevrolet S-10 models, full size box vans, and most recently, an electric version of the Ford Transit Connect. Unlike many manufacturers of this sort of equipment, Azure did sell to hobbyist converters as well and did offer some ongoing support. Unfortunately, Azure Dynamics went bankrupt and was liquidated in early 2013, ending any commercial and offical support for this equipment.

My AC55 and UMOC445TF inverter (and some other spare parts most notably a second inverter with good brains but a bad power section) were probably salvaged from commercially converted delivery vans or small trucks that went to a too-early grave. The parts were some of a larger lot that were being sold from an abandoned storage auction, so I got a good deal price wise, though I knew the trade off was going to be less support, likely more risk of reliability issues (so far so good…) and a somewhat less efficient and heavier system than a modern equivalent.

I was able to get all the original Solectria parts I needed for the drivetrain conversion, with the exception of the interface box for the UMOC converter. This part connected to the 25 pin data cable from the inverter through which all its control and indicator signals go and broke it out to connections that could be integrated with the vehicle systems. However, this particular part was not really necessary as it worked better to build my own equivalent part that integrated the UMOC with the Elithion BMS, Car wiring, and a Gen2 Prius gas pedal.

I did build a reasonable facsimile of a Solectria UMOC445TF benchtop breakout box, which is critical for testing and debugging the system. You can see it in action on my youtube video bench testing the motor and inverter.

The Solectria AC55 and UMOC445TF inverter are 15+ year old technology. Given the rate of progress of semiconductor technology and EV motor design, it is to be expected that they are heavier, less efficient, and less powerful than the modern equivalents.

The inverter (note: same part is called the “Controller” in a DC conversion) in an AC powered EV is the equivalent of the carburetor or throttle body on a gas engine.   It regulates the amount of electricity going to the motor.   Think of it as a giant light dimmer.   The inverter consists of a computerized brain which listens to signals from the driver (throttle position, forward/reverse, etc) and from the motor (speed, direction, temperature) and uses this information to switch power from the battery in the right pattern and quantity to make the motor respond as the driver expects.

The only reasonably affordable AC system even available to DIY converters right now is the HPEVS family of systems. These are comparatively low voltage systems (For several years, their maximum battery voltage was 108v, though it appears they have just released a much-anticipated 144v controller). Their higher end systems are comparable in overall horsepower to the Solectria system I have though owing to the lower voltage they require much higher battery current to make that kind of power and this has some disadvantages.

I have seen several conversions using these systems and I would say they are awesome for smaller cars and conversions where budget is not unlimited, and would have worked well in the scion had I retained the transmission instead of going the direct drive route. Because I did go direct drive, the additional torque of the AC55 and UMOC are a significant benefit in comparison.

Metric Mind Corporation is a reseller of OEM quality AC drive systems (motors and inverters) and other EV components, and they also perform a lot of custom design and engineering work. They are known for being very high quality, high performance, and very expensive. Due to the parts being designed for OEMs, they can be very complex to incorporate into a DIY project as well. Any of their 100kw systems or bigger would have done well in the scion, though I would have probably needed a much higher gear ratio had I wanted to go direct drive, owing to the higher RPM and lower torque of most of their systems relative to the Solectria one.

Rinehart Motion Systems makes (among many things it appears) high-end 3 phase motor inverters designed for EV use. If my UMOC445TF dies and is unrepairable, or if I decide I want to try for a substantial horsepower upgrade, I will probably try to integrate one of their inverters with the existing AC55 motor.

Everything here is written from memory.  Please use your own judgement and consult and understand all the Solectria Documentation (above) before attempting any of this.    This motor and inverter use and generate dangerously high DC and AC voltage which can be fatal.   Do not attempt any of this unless you have a good working knowledge of electrical concepts and safety.

My AC55 and UMOC445TF came to me at about a 80% discount from their original MSRP via an abandoned storage auction.   I was fortunate to have some guidance via a small amount of underhanded skullduggery as to which Solectria components out of the many that were there were likely to be the best bet for cobbling together a running system.   I paid cash and made sure I got a receipt showing the purchase was legit, and took the parts home where they sat for a couple years before I got around to playing with them.

As the parts were as-is, where-is I wanted to bench run the system before I did anything else like start building a car around them.   I had the Motor and Inverter and cabling.  The only other part I needed to try and run it was something to emulate the various control signals the UMOC wants.   These include throttle position, motor direction, regen enable, and several other safety signals and several indicator outputs.   Fortunately all of these signals are simple TTL level except for the analog 0-5V throttle and power limiter functions.   This means it was easy to build a test box.

The test box more or less implements the schematic shown in the appendix of the UMOC technical manual, allowing control of all the switches and putting 0-5K potentiometers on the throttle and power limiter inputs.   I designed mine to resemble the test box shown in that documentation.   LEDs in series with 1K resistors go on all the indicator outputs.   All of this is housed in an electronics project box with a 25 pin female connector such that a male-male 25 pin D-shell computer cable can connect them.  It does not require any outside power; it gets everything it needs from the UMOC.

I was fortunate that the motor required virtually no work.   The motor was used and had clearly been installed in a vehicle,  but it likely had very little mileage.   Here are the basic things I checked out/replaced:

Given the complexity of the UMOC445TF inverter and the fact that some of its components (especially the computer board) are now basically irreplaceable,  it is important to handle the UMOC carefully and ensure it is in good condition before using it.    Unless you know your UMOC445TF’s current operational status and trust the information of whomever provided you with it you should seriously consider disassembling it and performing some checks.    Here is what I did:

Consult the video for the end result:

You need two.   The first is a simple 12VDC power supply good for 5 amps;  this emulates the car’s 12V electrical system.  A fully charged SLA battery, car battery,  or a regulated 12V power supply can provide this.

The second is harder:  You need at least 200VDC at at least 5 amps to power the high voltage section of the inverter.   Your options are:

This means finding (unlikely) or building and using a test box such as I describe earlier.  This box must emulate throttle position,  power saver,  forward, reverse, regen, drive disable, digital enable, and it should also break out the four indicator lights:  Motion, Fault, Rotor, and Battery warning.   All signals are TTL or 0-5V analog so creating a test box is not hard to do going from wiring diagram in the appendix of the UMOC4445TF service manual document linked to above.   Double, triple, quadruple check your pinouts are correct.

Set up a laptop computer running on battery power and not grounded to communicate with the UMOC.   (or use an RS232 optical isolator if using a desktop machine).    Isolation is critical to avoid damaging the irreplaceable UMOC computer board.    38400 8N1 straight cable, unless you have an older UMOC with the gray RS232 plug; this needs a null modem cable.   hyperterminal (windows) or minicom (linux) will work as the terminal emulator program.   It is best to use a hardware serial port but if not available a USB serial adapter will work as well.    Make sure to configure the terminal program to NOT SEND ANY MODEM CONFIGURATION COMMANDS.  These may confuse the UMOC.   Some modem initailzation commands I sent accidentally managed to put my UMOC into firmware update mode.  Yikes.

No Motor Power Up Attempt

Here is the basic process I came up with for powering up and talking to a UMOC.

For the first power up attempt,  do not connect the motor at all.   The goal here is only to see if the UMOC’s brain comes up and you can talk to it and it can read as many control signals and data points as you can give it.