on Lake Washington with amphibike MKIII

Thanks to Mike and Belinda L. for taking the above pictures and more...

My Amphibike (Human Powered Amphibious Recumbent Tricycle) has evolved through three major design overhauls. It all started as a way for me to access near-shore areas of lake washington and several swampy areas near my parent's home and the University of Washington campus. 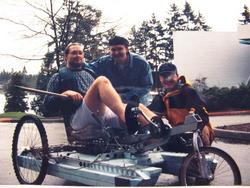 Brian sitting on original amphibike with friends Hal and Joe

Too much sugar, too much time, and a proximity to the Mercer Slough (a swampy area on the east edge of I-90) led me to a design for a new bike. This bike would be amphibious, allowing me to ride right down a boat ramp and keep going in the water. It took me six weekends working frantically to go from the initial concept to my first successful dual-medium ride. This occured in the summer of 1997. The first amphibike chassis underwent many refinements over the four or five years it lived. There were several floatation redesigns, culminating in a pair of nearly indescructible fiberglass pontoons. I went through several water propulsion systems including a paddlewheel, homemade propeller with homemade gearbox, then a (bent) stainless prop that must have weighed 10 pounds, driven by a gearbox that must have come out of a WW2-era boeing aircraft, then finally the same gearbox driving a much lighter aluminum prop. Eventually I decided to start over in order to try to reduce the weight (it tipped the scales at around 130lbs) and to try to add some new features. 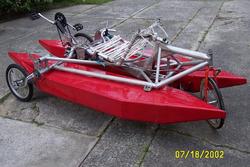 Side view of MKII amphibike

The first amphibike lasted a long time and was quite successful. But it was heavy, and while very sturdy under static load, the bolted-together platform frame had little torsional strength. And the many redesigns had left many extra cuts and drillings that weakened the frame and made it difficult to evolve it further. So in 2002, not long after buying my First House, I started over from scratch. This new design would be way fancier, with a front-drive, rear steering setup, and retractible A-arms that held the front drivewheels down but allowed them to be ratcheted up out of the water. I would reuse the fiberglass pontoons from the original bike to save time. It would also be built out of lightweight aluminum tubing and not use any ugly square channel. Oh, and it would also require learing to weld aluminum. If all this sounds like too much ambition, it was. I completed the bike, with all features I originally planned, but it had hubris. A fatal flaw. basically, I did not follow KISS (Keep It Simple, Dumbass) and as a result of my overenginnering, the retractible wheel design was simply not strong enough, and it broke on the first ride. I managed the 5-mile ride down to my chosen launch point, and a nice 3-hour tour on the water, but a frame crack at one of the structural welds openned up on the ride home and I ended up dragging it most of the way back to my house. DOH! Long story short, I decided the very-elegant frame was not repairable, and I sulked for about a year before starting over with the MK3 design. 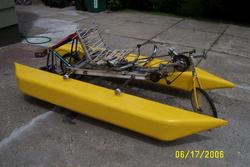 OK, so I was now a little older, and a little wiser, and the one or two hundred hours of labor that I must have put into the MK2 were a distant enough memory that I could buck up and start over. If nothing else, the MK2 amphibike was an excellent learning exercise. By the time it was done, I was a marginally decent welder, and a lot better at fabrication in general. Also, the MK2 was not a total loss. Its seat and propeller drivetrain, along with the wheels I built for it could be reused on a new bike. This time around I decided on a hybrid design between the MK1 and MK2 amphibikes. This one would put the steering up front and drive at the back like the original. Unlike the original, the drive wheels would be inboard of the pontoons. This would make a retractible drive setup much simpler than the MK2, and much stronger. I went back to the somewhat heavier, but much stronger and easier to work square aluminum channel and tubing of similar dimensions to the original amphibike. This time, instead of trying to design a new bike around the old pontoons, I started over with a new pontoon design as well. The new pontoons are a much simpler design utilizing kevlar laminate over styrofoam, and displace more water with less surface area, and they weight 12 pounds apiece while the fiberglass ones from the MK1/MK2 weight about 25 pounds each. This bike has so far been mechanically fairly reliable (better than the chain-throwing MK1, and nothing at all has shown any sign of breaking despite a half-summer's hard use as of this writing) Though as things are right now one pontoon needs repair; I ran into a submerged piling on the Duwamish Industrial Waterway and smashed a dent into the bottom of the pontoon. The kevlar did not tear and I took on no water, but there was significant damage to the finish. Planned refinements include a redesign of the retracting rear wheels, and retrofit of a real recumbent bike seat, and possibly repositioning of the front crankset.