Here is a side view of the MK2 Amphibike. Clearly visible is the rear steering, front drive setup. Note the steering tie rod reverses sides to maintain sane steering. Note the retracting front wheel arms. You pulled the levers above the pivot points, and pulled back to lift the whole arm. The chains did not need tensioners since the drive sprockets were concentric with the pivots. There were rubber bushings that supported the "down and locked" pins to provide some suspension too. The weak point in the frame was the pivot points on the front arms, and the ouside legs of the front wheel arms. 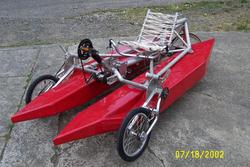 Here is a front view of the MKII. This is probably the coolest looking bike of the three I have built (some guy on a road bike crashed while gawking at me as I was riding it on its maiden (and only) voyage. The reason for my deciding on front wheel drive and rear steering was that for pulling out of the water, it would be useful for the drivewheels to hit land first. Also, since the steering wheel doubles as a rudder, putting it in the back should make it more effective. Also, the front wheel drive made for a lighter drivetrain. 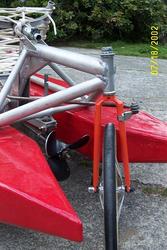 Here is a closer view of the rear of the MK2. You can see the propeller retracting mechanism, it is a simple spring loaded bar with a notch in it to catch a support in an "Up" and "Down" position. A hinged arm supported the propeller laterally. You can also see that the seat back angle was adjustable. The seat base support was also. 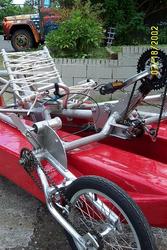 Here is a closer view of the retracting arm assembly that supported the drive wheels. You can see the release lever (push it in to push back the support pin in the main frame). You can also see the brake layout and drivetrain (3-speed derailleur and 2-speed-plus-neutral sturmey archer hub). I actually ran the sturmey backwards in this setup. (I drove the hub shell, and took power from the sprocket.) You can also see the propeller gearbox, which is a heavily modified pneumatic air wrench with right angle attachment. This gearbox works great and is now installed on the MKIII. It has a release lever to disengage the propeller when on land. The seat is simply a few lawn chair tubes and sections of bike rims welded up to make a frame, and then laced with rope. Not very comfortable, but quite light. The same seat is now on the MKIII, though I want to upgrade to a real recumbent seat. Another challenge I had with this design was that the drive wheel on one side had the chain on the "wrong" side, which means that the freewheel had to be on the drive side instead of the wheel. I have the same issue on the MKIII, but I solved it by buying a matched pair of Odyssey BMX hubs, one each in left and right side drive. 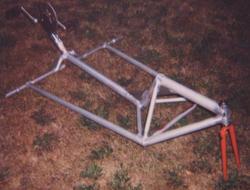 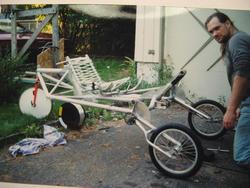 Here are a couple pictures from when the MKII was under construction. In the first, I have the basic skeletal frame completed, but not all the cross bracing for the retracting arms is in place. In the second, it is a bit farther along, with all three wheels and some drivetrain components. The pontoons were reused from the MK1, swapped right-for-left. The notches that had been to allow my feet clearance for pedalling now allowed clearance for the retracting drivewheel arms. Reusing the pontoons may have contributed to the strength issues that doomed the frame since I was trying to design around something not originally intended for that setup.