This bike, my current commuter, is a Redline Monocog mountain bike. It has a pretty cool matte black finish with pinstriping. I purchased it as a bare frame at the 2006 Seattle Bike Swap. I built it up with decent but non-exceptional parts for the most part: good, solid handlebars, stem, Thompson seatpost, etc. 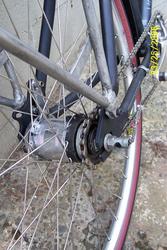 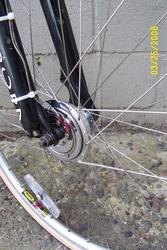 One interesting aspect of the bike is that I have some Vintage Sturmey Archer components in the drivetrain. Specifically, an "AW" 3-speed hub from 1978, and a front "Dynohub" from 1965.

The Sturmey Archer "AW" 3-speed allows a choice of 1.33, 1, and 0.75 ratios, about equivalent to the overall ratio of a 13/24 cogset, but of course with fewer steps. The big advantage from my perspective is I get multiple gear ratios without incurring the maintenance hassles of a derailleur setup. The AW is widely considered to be the most reliable internally geared bike hub out there. Originally I used an "S3C" hub in the rear (seen in the picture), which is a 3-speed plus coaster brake. The idea was that the coaster brake would be a 3rd redundant brake. Unfortunately the S3C turns out to have a reliability issue (which surfaced after about 3000 miles of hard riding) in that it uses spring-loaded roll pins to support ratchet pawls inside the hub, and these eventually fatigued and failed, causing the hub to self destruct. At that point I went to the AW, which has larger, solid pins instead of the roll pins. It has Less internal friction too.

my Front hub is a Sturmey Archer Dynohub. This is a hub with a built-in generator, designed to run a headlight. The generator has no additional moving parts over a regular front hub, so the only extra friction it causes is from the magnetic field itself. The magnet ring is attached to the inside of the hub shell, and the windings are stationary on the axle. More details on how I use this generator are under the electrical system discussion below. As an interesting aside, I have been running this one single 40+ year-old dynohub now for over 10 years, and what must now be around 40,000 or more miles based on my usual riding habits. This includes jumping, potholes, and usage in all weather conditions. This hub has been absolutely reliable. I haven't even needed to replace the bearing cones yet, and the chrome finish, while no longer perfect, is still very presentable. The only recurrent maintenance is to repack the bearings when I have to re-lace the hub onto a new rim (too innumerable times to count by now). The reliability of this hub gets an A+ from me. It may be heavy, but it was built to last. 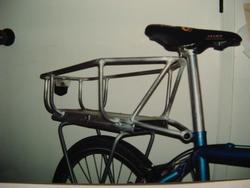 I carry a lot of crap around when I am riding. This is because I ride to get stuff done, not just for fun. I don't really like wearing backpacks or other such things on my person while riding, and I don't like pannier bags that hang off the side of the bike. So, I have built a succession of extreme-duty cargo racks with integrated aluminum baskets. I can carry a couple grocery bags, or my Timbuk II bag in the basket, and if need be I can hang panniers on the sides for even more cargo capacity. The rack is made from 4043 1/2" OD aluminum tubing (supposedly not weldable, but holding up fine, thank you) and a pair of extruded aluminum modem cases to make up the deck. Batteries and other electronics are stored inside the deck of the rack to keep them out of the weather and out of the way. I built the current version of this rack around the year 2000. I have had to modify its mounting brackets once or twice to fit new bike frames, but other than that is has held up great, even through crashes that left me sitting on top of it while sliding through the dirt. Unfortunatly it doesn't mount level on the current Redline frame, since I didn't bother to rework the mounting brackets this time around.

My commuter bike has an integrated lighting system that is powered by the Sturmey Archer Dynohub that is built into my front wheel. The Dynohub is not powerful enough to directly run my 10 watts worth of lights, though. Instead, I have it set up to constantly charge a battery that is installed in the cargo rack of my bike. The battery, supplemented by the generator when I am moving, will easily power all my lights. With this setup I can commute to work through the darkest months of winter, and I may only run down the batttery, and thus need to charge it up overnight, once or twice in the entire year.

For lighting, I have a 3-watt low beam (Be-seen) and a 6-watt high beam (enough to ride in total darkness). These are old Vistalite "Bathysphere" headlights, but I like them because the housings have room for electronics and switches, and have adjustable focus. Plus they are very durable and old enough that nobody wants to steal them. For running lights, I have two modified vistalite flasher units. These have been modified to run off of the central battery that powers everything else, and to be switched from up front on the handlebar. I have also soldered in much brighter LEDs than the originals.

The following links are to a couple pages I have recycled from my college-era website. These pages provide some ideas on how to build an electronic circuit to charge a nickel-cadmium battery from a bicycle generator. Please note that I have not revamped these pages, and they are 10 years old now, so technology has moved on. For example, the Regulated Battery Charging Circuit I describe ought to be built now with a power MOSFET instead of an NPN or PNP device, and it should utilize PWM switching instead of an analog regulating mechanism for maximum efficiency. Nonetheless, these circuits work and are easy to understand, so they might be a starting point for you. Currently I am only running the basic bridge rectifier charging circuit. Also, since I originally wrote these pages, Nickel Metal Hydride and Lithium batteries have come onto the market. However, for an application such as unregulated, intermittent charging from a bicycle generator, the forgiving nature and robustness of the Nickel-Cadmium batteries is an advantage. You generally need a "smart" charger for the other battery types. My Ni-Cd batteries (simply RC-Car battery packs) last several years each in this application. 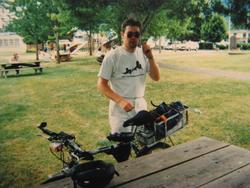 My first mountain bike, outfitted with all the bells and whistles 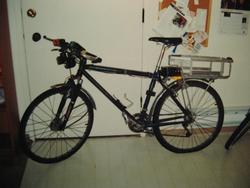 My Commuter Bike setup traces its origins all the way back to my old Puch Bergmeister. It was the first bike that I started outfitting with integrated lights and generator-powered charging systems. But I didn't really go crazy until I got my first mountain bike (The picture with me doing my DB Cooper impression). You can see an earlier riveted version of the rack (The box on this one made by my dad when he was a kid, and recycled by me) And you can see a large amount of electronics, including the walkman radio mounted on the handlebars and rack. The second picture is the two-generation-later model based on a 1997 trek 930, with a redone but still riveted rack, and still sporting a radio and two generators. The two generators on this one were a homemade DC generator that was good for about 15 watts, requiring a Regulated Battery Charging Circuit , and the Sturmey Archer Dynohub that I am still running today. This picture was taken at this bikes end of life, the frame had broken at a rear dropout. There was another trek 930 (2000 model) and a Kona Blast (2004 model) that followed until I built up the Redline Monocog in 2006. Every one of these frames except the 2000 trek 930 either failed after about 2 to 3 years, or had fatigue cracks that I found when decomissioning them. I wreck stuff I guess. I am hoping that the Redline Monocog, with its extra-heavy disc-brake dropouts, will last a bit longer.

My commuter bike reached its maximum complexity as far as electrical system features go in my college days. It had multiple generators (some homemade) and the electronics to manage and monitor them. It had attachments to power devices or hook up a solar array for charging. It had a radio and ammeter. It had a trailer hitch as well as the rack in case I wanted to haul even more junk than usual. For a while there, I also expirimented with the drivetrain as well, trying to get as many speeds and as low as possible gear ratios onto the bike. At one point I had figured out how to attach a 14-36 (yes, 36) cogset onto a Sturmey Archer AW 3-speed, and I had a 48/38/24-tooth setup in front, and a total of 45 speeds. I had a low enough gear on that setup that I could literally ride up stairs. The torque I could put into the hub kept breaking it though, so I eventually gave up on that. In the last several years I have been in retrograde as far as features go on my commuter bikes however. I have been focusing more on reliability and simplicity than on getting as many things as possible going at once. Hence my current setup: 3 speeds, one generator, clean lines minimal exposed wiring, nothing extra. The setup works great and is far more reliable than any off-the shelf rack or lighting system I have ever seen. My next build, once the Redline reaches end-of-life, may be based on a single-speed cyclocross frame instead of a mountain bike though. Gotta keep things interesting.