1977 Dodge Ramcharger, AKA "The Antichrist"

The Antichrist, a 1977 Dodge Ramcharger, was my first car. I bought it with hard-earned lawn mowing money a few months before my 15th birthday. It ran well enough for my dad to drive it home 50 miles on side streets, but the engine had a loose rod and needed a rebuild. The plan was for me and my dad to rebuild it over the course of the time up until my 16th birthday. During college I converted it from an automatic to a stick shift, when the automatic started to cause trouble. Overall, it was a good truck, and served me well up until I sold it in 2004. I sold it because I did not figure on needing two 4x4's, and the by-then-running 1962 Land Rover was a more interesting truck. 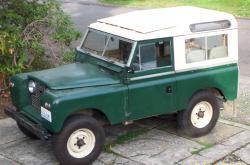 I purchased my current daily driver, a 1962 Land Rover Series IIA 88" Station Wagon, AKA "mephisto" from a co-worker in 2003. It was very solid for its age, but needed major mechanical work before it could be driven. Little did I know what I was getting in to. 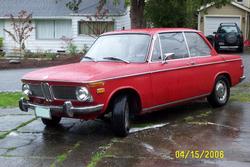 I bought this 1971 BMW 1602 as an economical-yet-interesting second car in 2004 to replace the Dodge. I owned it for about two years, during which time I made some much needed, but mostly minor repairs to the suspension, brakes, and interior. I also performed some moderate body repairs and repainted it, but I did that work myself where I should have hired a pro, at least to do the painting part. Nonetheless, it was a much better looking and running car when I sold it vs. when I bought it. I sold it while downsizing, prior to moving from my First House to my South Park Triplex. 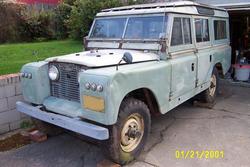 This truck is an Ebay boondoggle, dragged home from central Oregon in 2005. The truck is a rare (#473 of 811) North-American-Dollar-Area (NADA) six cylinder 109". It was meant to compete better with the more powerful american trucks of the time. I bought it for a low amount on ebay. While it is 99% complete including the rare NAS bits, the price reflected the condition. The frame is a total loss due to east-coast road salt. The truck hasn't been licensed since the 70's, when its engine failed due to a botched oil change. It currently sits in a cargo container, awaiting a full rebuild. 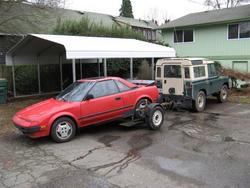 I purchased this barely-running 1985 Toyota MR2 and converted it into a full electric vehicle (EV). Some people do EV conversions to make a political statement, others want to do it to help save the environment. Some people go drag racing. I did it for the technical challenge, and because I wanted an economical, low maintenance, yet novel 2nd car. You can read much more about my Toyota MR2 EV.