I purchased my 1962 Land Rover 88" series IIA station wagon from a co-worker in 2003. It was very solid and original for the year, but needed a lot of mechanical work. I spent about a year restoring it to running condition. I currently use it for longer trips and Hauling, and of course PCRC (Pacific Coast Rover Club) outings. I use my Toyota MR2 EV for nearly all of my around town driving.

A quick summary of the "features" on this truck:

I don't know a whole lot about the history of this particular truck. I got it from a co-worker after he learned I was into 4x4's and old trucks in general. He had bought it from a fellow on whidbey island who had in turn bought it from some lawyer who had it sitting under a tree, non-running for the better part of a decade. The previous owner to my co-worker managed to get it driving but it needed more work than he wanted to spend, so he took a few parts off of it for his other rover and sold it to my co-worker. My co-worker put a new head on the engine and did a couple other things, but mostly it just sat in his carport for the better part of five years until his wife told him to get rid of it. So, he offered it to me. I had been interested in getting an old land rover, having always thought they were cool, but the few trucks I had managed to look at were either too expensive or total wrecks. His price was agreeable, so the truck was mine.

The engine and transmission on this truck are stock. I know that the engine is not original, and there is a good chance that the transmission is not original either. However the chassis, bodywork, and interior are very original, with the exceptions that the front seats have been reupholstered, and the truck has been repainted bronze green. The original color was beige, as seen on the interior pictures of the truck. 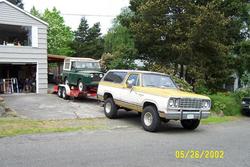 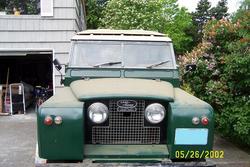 1962 land rover, with many years of dust

These picture were taken when I got the rover home after purchasing it. Lots of dust, and a seized parking brake, but still managing to look regal in a neglected British sort of way. 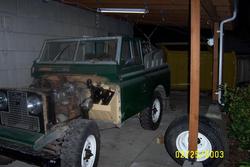 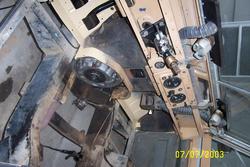 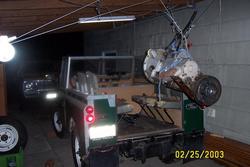 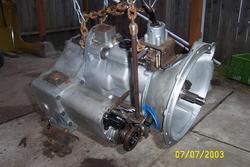 When I got the truck home, I knew it needed a fair amount of work, but basically it was quite solid. The engine was badly tuned but otherwise in good condition, and the bodywork was quite good for the age of the truck. Long story short, here is what I ended up doing to get the truck driving:

I've had to do more maintenance since then of course (It is a 45 year old british truck after all), but basically nothing too major. It is behaving itself fairly well as a daily driver. I'm hoping it continues to do so, at least until such time as I get the EV going, so that if anything does go wrong I won't be totally stranded.

A stock, original series IIA is useable as a daily driver, but it will be slow. These trucks were not designed for freeway use; they were meant for bumping around on back roads and slogging through dirt and mud. You don't need speed for that sort of thing, you need torque, and so that is how they are geared. The rule of thumb I was told was that if you could be happy driving a stock VW bus, then you could be equally happy with a series land rover, since they have similarly poor performance envelopes.

All that said, however, there are things that can be done to improve the performance of one of these trucks. Of course, you can just drop a newer engine into the truck, but I prefer to keep things more original. Here are some minor things that have been done to my truck to make it a bit more pleasant to drive. There are lots more things that could be done as well.

Some other things that can be done to improve performance while still maintaining a basically original drivetrain: