There is a great deal of variation in tires. Most OEM tires are designed to offer low rolling resistance, while many aftermarket tires are performance biased and roll less easily in the name of better traction. In an EV, the difference between these can amount to a 10 mile difference in range, it is really quite substantial.

But if you do some research online, you can find some lists of good low-RR tire models. See my EV Reference Material for some links. One of the best I could find, which also happens to fit the MR2 (though its one size bigger than the ideal size for the car) is the Bridgestone B381. I purchased a set of four for the MR2. To help things along further, I also found a set of four 1991 Honda CRX alloy wheels, which are about the narrowest modern alloy wheel you can find that fits the MR2. They are a 5Jx14" wheel, whereas the originals are a 5.5Jx14, or about 1/2 inch wider. All else being equal, narrower wheels roll better. The honda wheels also have a very smooth profile.

The effect of installing the 381's, mounted on the honda wheels on my MR2 was actually slightly detrimental. The rolling resistance went back up very slightly to about 0.0124. I attribute this to the fact that the tires are brand new, and new tires always roll less easily than the same models, once worn down a bit. The tires I was replacing were well worn. So as time goes on these tires should start to roll better.

The 85-89 Toyota MR2 had a factory option rear window visor available. This visor should improve aerodynamics a bit as it continues the curve of the top of the cab of the car farther back. I purchased one off of ebay and fitted it to my car. I haven't found a lot of info online but the forums at http://www.mr2oc.com suggest that It might buy my a percent or two improvement in aerodynamic drag. Worth a shot, plus it looks cool.

The front brake calipers in the MR2 include some small spreader springs, which are designed to reduce brake drag from the disc brake pads. The rear brakes did not have these springs installed in my car, though it appears that some MR2s did have them. There was a noticeable difference in ease of turning the front wheels vs. the rears as a result, so I believe a measurable improvement in rolling resistance could come from fitting spreaders to the rear calipers.

As it turns out, http://www.rockauto.com actually sells a rear disc brake hardware kit for the 85-89 Toyota MR2, and that kit includes spreader springs. (Thanks to Scott Samuel for finding this!) Some disk brake pads (including mine, as it turned out) are pre-drilled to accept these springs, but if they had not been, it would be easy to drill holes to accept the springs. The spring holes are drilled on the outer edge of the brake pad metal backings, each 1.25" on either side of the middle of the pad.

I have not conducted a coast-down test after installing the springs, but qualitatively, there is much less audible brake drag versus before, so surely that must correspond to less friction. The owner of one of the Other Electric MR2s out there, Scott Samuel, observed a significant reduction in brake drag, after installing these springs on all four corners of his car. 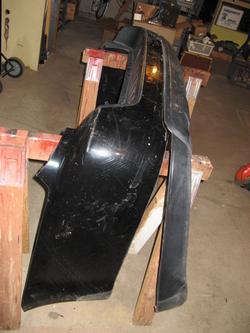 subaru plastic rear bumper being cut along a convenient line 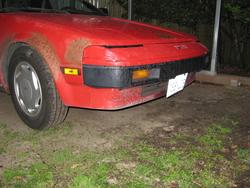 The nose of the MR2, before installing air dam made from a subaru rear bumper

the nose of the MR2, after installing the air dam made from a subaru rear bumper

My MR2 originally came from the factory with a lower air dam that bolted onto the front lower lip of the car. This piece is missing on virtually every MR2 out there as it was the first thing to get wiped off on speed bumps and other high spots. An air dam helps aerodynamics by diverting air that would otherwise go under the car and create turbulence to instead be pushed out in front and to the sides of the car. I had always planned on doing something to create a new air dam, but I had figured it would be time consuming to make one, or very expensive to buy an aftermarket one.

So this last weekend, I am helping my friends Audin and Jason with their Commuta-Car rescue, and I noticed a large pile of plastic bumper skins in a pile behind a nearby body shop. It occurred to me that I could probably trim one down to make an air dam that would fit onto my MR2 relatively quickly and easily. I found somebody working at the shop and confirmed it would be OK to grab one of the bumpers, and I ended up picking out the plastic rear bumper cover from some sort of a Subaru.

As the pictures show, the subaru bumper, once trimmed down very aggressively (to the point where what is left only weighs a pound or two) fits so well that it almost looks like it belongs on the MR2. I had expected to have to cut a section out of the middle of the air dam to narrow it to fit the front of the car, but in fact the width and front profile of the bumper are almost perfect. The profile of the air dam will channel air around to the sides instead of under the car. It took me a whopping two hours to do this whole project, and zero dollars, since I used nuts and bolts removed from the car during the conversion to fasten it. Considering the level of effort to do this, it turned out quite well. We'll see if it makes a noticeable difference in current draw at freeway speed.

This section covers some planned work to improve the range of the car further.

One of the best ways to improve aerodynamics in a car is to put cowls over the rear wheel fender wells. This reduces air turbulence caused by the open fenders. This improvement would buy me better efficiency at freeway speeds, and I should be able to whip something workable and presentable up fairly quickly. I may even be able to make the fender cowls out of scraps from the subaru bumper that I used to make the front air dam.