This part of the control circuit is a simple extension to what is left of the very complex Heat and Air conditioning control circuit in the MR2. After ripping out all the Air conditioning and automatic temperature management circuits, I was left with the fairly simple blower motor circuit and its control switch. I added a contactor and thermostat wired in series with the thermostat attached to the heating element of the EV Toaster Heater so that whenever the fan motor runs, the contactor is energized. Once the heat warms up the thermostat, it will open its contacts and allow the heater to cycle instead of getting too hot. The contactor itself is a magnecraft DC contactor, mounted inside a round plastic ceiling-mount electrical box, located in the front trunk compartment of the car. I also ensured that if the blower fan fuse blows, this will also cause the heater contactor to open.

The DC-to-DC converter powers the 12v electrical system. The control circuit uses another Magnecraft DC contactor, mounted just like the one for the heater, for this purpose. 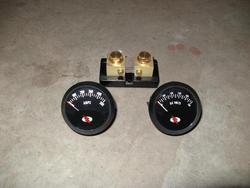 Ammeter (with shunt) and Voltmeter as purchased 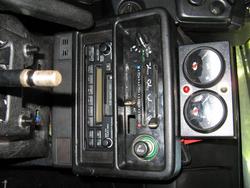 I am starting out with the two basic gauges that any EV should have: a voltmeter and an ammeter. The voltmeter shows the total voltage of the traction pack. Once you become familiar with the maximum and minimum voltages of your pack as you charge and discharge the battery, this is usable as the "gas" gauge. The ammeter provides an indication of how quickly you are draining the battery. Some people want the ammeter on the motor circuit, while others want it on the battery side of the controller. I am putting mine on the battery side, since it doesn't really matter how many amps are going through the motor, what matters is amps being pulled from the battery.

There are much more sophisticated gauges available for an EV, including analog state-of-charge meters (really just specially calibrated voltmeters), and sophisticated digital E-meters that contain a computer that dynamically monitors both battery voltage and current and use that information to display the best indication of battery charge and available range that you can get. Of course with sophistication comes cost and complexity, which is why I am starting where I am. I can always add something more later. (I do intend to install an E-meter at some point)

My Voltmeter and Ammeter are mounted above the center console in a plastic project box that I got from an electronics retailer. It fits the two gauges, along with enough extra room for the backup and charging warning lights and a terminal block to allow easier connection to the remainder of the circuits. The ammeter shunt is mounted in the tunnel area underneath the car, but physically very close to the gauges. The Voltmeter input is taken from the output side of the DC-to-DC converter contactor, so that it gets switched off when the ignition is off. 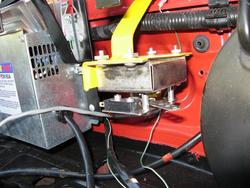 This is the throttle sender for the controller. It is simply a variable resistor and limit switch, installed into a sturdy little metal box. It is possible to make your own, but I bought the curtis one. The variable resistor gets wired directly to two of the pins on the controller. The SPDT limit switch (which toggles when the potbox leaves zero throttle) turns on the main contactor and kill switch contactor when my foot is on throttle, and also acts as one of the two reversing interlocks by preventing my reversing motor direction when the throttle is depressed

Mechanically this box needs to be attached to the throttle pedal (not gas, anymore). Mine is mounted directly on the other side of the bulkhead from the throttle pedal, and attached via a simple straight rod. I should have a secondary return spring, but I don't. It would be easy to add such a spring though, I only need to redesign the connecting rod slightly.