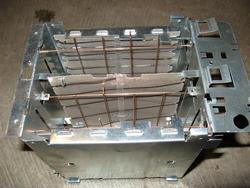 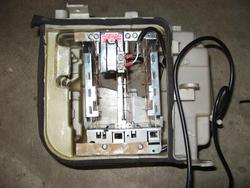 Just like any car, the windows will fog up on cold nights, and on cold nights it would be good to have a little bit of heat in the passenger compartment. So, just like any other car, my EV will need a heater. Of course, since there is no waste heat from an engine to use for heating, I will have to install an electric heater to do this work. This will, of course, also draw some more power from the battery pack and shorten my range a bit when it is running, (the rule of thumb is a 10% loss in range while running the heater) but it is still a necessity for a practical car.

I have seen or heard of several different methods for getting cabin heat in an electric car. One person just hooked a couple of hair blow dryers up to the defroster ducts. Fancier methods involve peltier modules for both heat and cooling possibilities. A common thing to do is find a small space heater and figure out how to stuff it someplace in the passenger compartment. In all cases, these are powered either directly or indirectly via the traction battery.

I'm not doing any of the ideas I have seen before. What I decided to do was to go down to the local department store and buy a cheap toaster. (In my case, $6.90 "Chefmate" at Target). Once stripped of its housing, control circuit, and bottom, it becomes a compact flow-through heating element that conveniently fits into the same space inside the ventilation ducting of the MR2 that used to be occupied by the air conditioning evaporator. Installation of the heating element was fairly simple: A few bent metal pieces to make brackets, a few holes drilled, and a bunch of pop rivets to hold it and the water heater thermostat in place within the original air conditioner evaporator housing. I used a couple computer power cords for the wiring.

The 850w heating element will probably only provide modest heat, but it should be good enough to defrost the windshield and add a little bit of heat to the small passenger compartment in the MR2. Since it is electric, there will be the option of running it while the car is still charging, to heat up the cabin and defrost everything before even unplugging. Another advantage is that heat will be instant, unlike a regular car where you don't get any heat until the engine warms up.

The heater element is switched on and off by a DC-rated Magnecraft contactor (thanks ebay) whose 12v coil is hooked into the original heater switch on the console such that the heat turns on whenever the blower is running. The blower motor has four speeds and works as it always has. I did ensure that things were wired such that if the blower motor fuse blows, it also cuts power to the heater contactor coil. I also incorporated a water heater thermostat to regulate the heating element by turning off the heater element when it gets too warm. The blower stays running, so once the heater gets up to temperature it will cycle, much like the heat in your house. The thermostat is set to its lowest value (110 degrees) but that should be plenty. I'll have to open up the heater box if I want to adjust it. I picked the low value to be on the safe side since I don't know how much heat this thing is really going to put out.

One last clever thing I am doing for heat has to do with where I have mounted the battery charger of the EV Charging System. The Russco charger is located in a recess behind the driver's seat. One of my Chassis Modifications to the car was to create this mounting location for the charger. See the EV Charging System page for more details. The waste heat generated by the Russco charger (probably about the same amount of heat as is generated by an incandescent light bulb) will get circulated into the cabin via the Russco's cooling fan. This should keep the cabin a degree or two warmer than the outside temperature and hopefully reduce my need to use the heater.