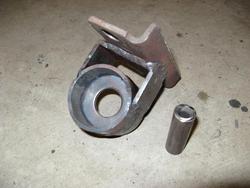 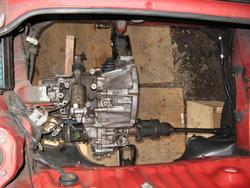 Construction of the new Mounts

I basically copied the design of the original mounts, except that I used much stiffer rubber blocks. The design is basically two short cross sections of pipe, each about 7/8" deep, welded against either end of a washer of about the same outside diameter. This assembly has a rubber block glued into each end of it, and another section of 3/4" outside diameter pipe is pressed through the middle. The inner section of pipe is supported by the rubber blocks. Once in place with a washer on each side and a bolt through the middle, the rubber blocks will be held captive and will make for a good, solid vibration damping mount. This whole assembly is welded onto whatever bracket I need to make to make things fit together.

The pipe I used came out of a scrap metal bin from a local industrial supply shop. I had trouble finding rubber of the right size and shape, until I found a big hunk of old conveyor belt in the blackberries behind some industrial buildings near my neighborhood. It had probably been there for 20 years, but aside from some surface oxidization of the rubber it was in good shape. It was 1 1/8 inches thick and nylon reinforced. Perfect. I hacked a chunk out of it with a hand saw and hauled it home. Once Home, I used a hole saw to take "divots" out of it that were an interference fit for the inside of the large pipe. Viola! All the raw materials necessary to make new motor mounts!

Determining the new position for the motor and transmission was pretty ad hoc. By just playing around with the transmission and mounts when it was out of the car I determined I could flip the front center mounting bracket upside down. This would cause the whole transmission to tilt forward and effectively lower it. I did test fit the transmission with the bracket reversed (third image) To check for clearance. The driver side driveshaft is pretty close to a suspension bracket, but not close enough to be of concern. Other than that, no problem!

The first picture is of the chunk of conveyor belt and other raw materials gathered for making new engine mounts. The second is the new center rear mount, prior to painting and installing the rubber blocks. You can see the washer section in the middle that retains rubber sections and keeps the metal housing from sliding back and forth on the rubber blocks. The smaller loose section of pipe will get pressed through the middle of the rubber blocks. A mounting bolt goes through that. to hold whatever is supported by the mount. The third picture is from when I was test fitting the transmission (using the original mounts) to check for clearances with the front center mounting bracket reversed. 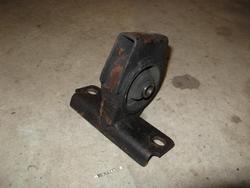 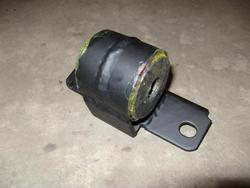 This mount consists of a vibration damper that bolts to the chassis, and supports the transmission via a bracket that is attaches to the bellhousing of the transmission. This mount is basically unchanged in design, except to replace the original rubber block with a much stiffer one that will allow more weight carrying capacity. This mount takes torque from the driveline whenever the car accelerates or decelerates.

The pictures to the side show the original mount and the modified one. A new shock mount made as described above has been welded on in place of the original one. The bracket that attaches the transmission to this mount will be unchanged. 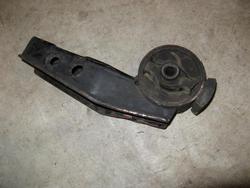 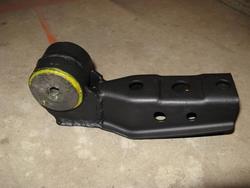 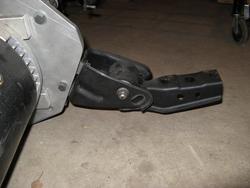 The first image is the original front center mount. The second is of the modified mount. The third is a close-up showing the upside-down transmission-to-mount bracket. Reversing the position of this bracket caused the whole transmission assembly to drop several inches in the front, providing enough clearance to put batteries over the top of it. 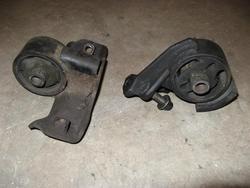 original passenger and driver side mounts 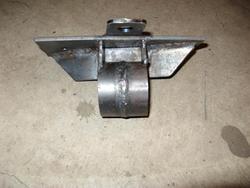 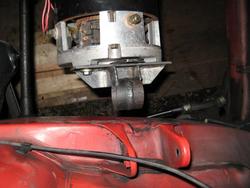 test fit of passenger side motor mount to make measurements for frame bracket. Original chassis bracket to be removed. 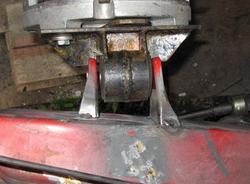 The front and rear center mounts were modified from the original mounts. However, this one is totally custom as it supports the rear of the motor and will attach to a new mounting position on the frame of the MR2 that I will weld in to support it. The original chassis bracket (visible in the picture) is in a position to interfere with battery placement, so removed it and use bits of it to make the new frame bracket.

This one is the easiest one. Since the other three mounts are now much stronger and stiffer than before, this mount really becomes redundant. Three mounts are enough to prevent the transmission/motor assembly from moving since it will vibrate much less, and is about 100 pounds lighter overall than it was when the engine was installed. Therefore, I will be leaving this one out. I will remove the chassis bracket as it will interfere with battery placement.