This page discusses some of the transmission modifications that I have made for my Toyota MR2 EV project.

Why modify the transmission?

There are some things that can be done to improve the efficiency of the driveline in an EV. Reduction of friction is one. Reduction of weight, especially rotating weight, is another. A typical automobile driveline (transmission, driveshaft(s), differentials, etc) can range from 80% to 90% efficient, according to most of the information I have found. the Transmission unit itself is typically 95% efficient or so. There are three things I am doing to improve my driveline efficiency. The first two are pretty straightforward, the third is kind of extreme. Read on. 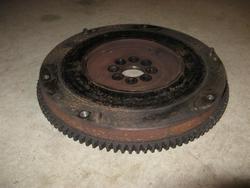 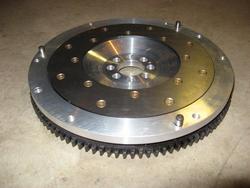 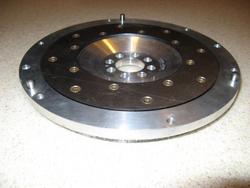 This is a huge way to reduce rotating weight, in the most effective place possible: where it moves the fastest. Reducing inertial weight does not make a difference at constant speed (except for a smaller overall reduction in vehicle weight), however it makes a huge difference when accelerating or decelerating. The less rotational weight you have, the less energy you have to spend spinning up the drivetrain, and the less energy you waste when slowing it back down.

The flywheel in a typical small car weighs fifteen or twenty pounds. The one in the MR2 is no exception. There are aftermarket racing flywheels that weigh around half what the stock ones weigh. They are intended for "stage 2" engine modifications, but since they have the same bolt patterns, they will easily replace the stock flywheel in an EV application. I am using a Fidanza aluminum racing flywheel. I will remove the ring gear (for the starter motor, unnecessary in an EV) for an additional weight reduction, and a small reduction in friction due to aerodynamic drag of the gear teeth as they spin at several thousand RPM. The stock MR2 flywheel weighs about 15 pounds, the Fidanza unit, minus ring gear, weighs 7.5lbs. These flywheels are available for a few hundred dollars from various online racing accessory retailers, and they are available for most any performance-oriented import car. A simple, mildly pricy bolt-in performace gain. I'm going to use a stock pressure plate and clutch disk, but lighter performance versions of these are also available.

This is another easy change to make to reduce friction in the driveline. Simply use a lighter weight of oil in the transmission. This must be done with some care of course, as you don't want to go too thin to avoid damaging the transmission. Consider though that the stock transmission oil is probably 75w90, which is pretty thick stuff. I am going to use 30-weight full-synthetic instead. Synthetic is thinner than natural oil for a given weight rating to begin with, and I am using much lighter weight of oil. This means less energy will be spent churning gears through molasses-thick oil. Using thinner oil will also offset the fact that the transmission will never get as hot as it did when connected to the gas engine. The heat from the engine would have thinned out the oil. I could even consider moving to automatic transmission fluid, which is even thinner, but some research would have to be done first. ATF is about 10-weight, but that may not be a good idea in my case since the transmission is intergal with the differential, which needs fairly heavy oil to avoid excessive wear. 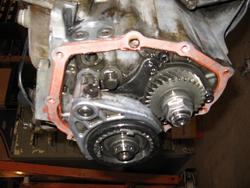 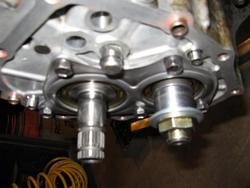 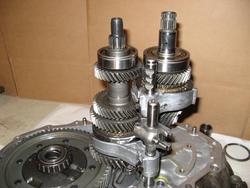 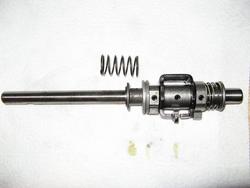 Removal of fifth gear and reverse

The MR2 transmission is a five speed unit. However, due to the torque/rpm characteristics of an electric motor versus the gas engine, and due to the unlikihood of my driving at very high speeds for very long, fifth gear is really unnecessary. Due to the standard design of a manual transmission, even when you are not "in" a particular gear, the actual gears still turn, causing friction, and more friction is caused by drag from the shifting forks and from oil being churned around by those extra moving parts. My crazy plan: Eliminate fifth gear to reduce friction (and as a small bonus, eliminate a few pounds of rotating weight)

As it turns out, eliminating fifth gear was relatively easy with the MR2 transmission. One side-effect however is that reverse was an additional casualty, since they shared a shifting rod assembly, that was held in alignment by the fifth gear shifting fork. No big deal, I will simply install a reversing contactor and reverse the electric motor itself to go backwards. As a (ridiculous) bonus I get the option of using all four remaining speeds in reverse as well as forwards.

Eliminating fifth and reverse was mostly a matter of removing the internal pieces that implemented those ratios. That consisted of the fifth driven and drive gears, the shift fork and synchro, and the reverse idler gear. I also ground the reverse gear teeth off the mainshaft and 1st/2nd syncro ring, where the idler would have engaged. I did this to reduce friction from churning oil with the now-unused gear teeth. I did have to manufacture a few spacers and retainers to keep the remaining pieces in place, but this was very minimal work. The gain from the internal modifications is (by my ejumucated guess) a reduction of about 10 percent in effective rotating weight and a similar reduction in friction.