This is a front view of my first house. The paint job is done except for the front retaining wall which I did later. The house would go on the market within a couple weeks. The roof was redone as part of the sale agreement. 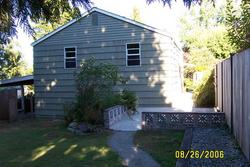 You can see the patio with the brick ornamental wall as well. The walkway was buried under 6" of mud when I moved in; I didn't even know it was there until I started clearing out the rear yard of all the debris and mud and overgrown vegetation. The main french drain I dug is under the gravel area along the fenceline. It continues from the front of the house underneath the patio all the way back to the rear of the property. 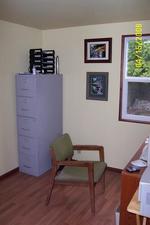 The second bedroom upstairs. I had set this one up as my "office". I installed laminate floors and dark stained mahogany trim, of which some was architectural salvage and the rest was reused from the bathroom. Incidentally, a good way to get mahogany panelling cheap is to cut up some old hollow core doors. I used that to make the window trim with great results. 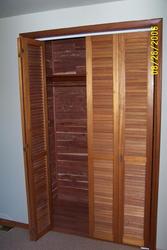 Lovered bifold doors, reused from before. Cedar Lined. This closet used to belong to the other bedroom (behind the back wall of the closet). I reused the doorframe to the closet, but turned it around to face the new master bedroom, increasing the size of this bedroom and decreasing the size of the original. I swapped "master" status of the bedrooms because the new master has a view, has more privacy, and has a door directly to the bathroom. 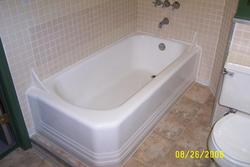 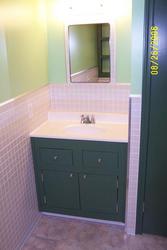 The downstairs bathroom was the first major interior part of the house I finished. Tile wainscot all around includes some reclaimed tile. All the faucets and the tub are vintage American Standard. The cabinets are homemade from reclaimed Husky Stadium bleacher boards from the University of Washington. The paint (I like it, but I suppose some people would have picked another color) was some "oops" paint from the local hardware store. Not visible of course are complete replacements of all the plumbing and wiring serving the bathroom.

The original downstairs bathroom was about twice the size of this one, but very poorly constructed. The ceiling was less than 6 foot high in several spots due to finish work going around low hanging pipes. The floor similarly was raised in several spots to get the fixtures high enough to drain into existing plumbing. It was impossible to stand up in the shower stall. A large closet covered the wall where the sink and door to the utility area are now. Everything had been done to an exceptionally poor standard and was badly deteriorated. 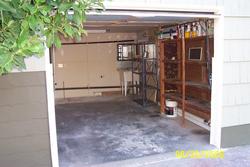 The only time this garage was ever clean. I took this picture shortly before the house changed hands to the new owner. Quite a novelty, seeing it not full of bicycles and land rover parts. The whole back wall was rebuilt by me. When I bought the place, the back wall was about four feet farther forward, and the washer and dryer were against the back wall, leaving only about 14 feet of depth in the garage. It was almost 20 feet deep after I reworked it. While the house lost about 100 square feet of finished space because I did that, it still gained vastly from an improved floorplan. 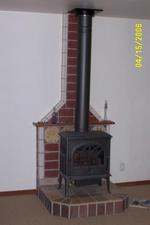 When I moved in, the house had a wood stove. It was poorly installed in an inconvenient place. When I redid the living room, I took out the old wood stove and replaced it with this gas stove and tile hearth. The new hearth is in the center of the back wall, a more typical place for a fireplace. Moving it here also allowed me to straighten out the hallway and increase the size of the upstairs bathroom.

All the tile for this hearth was recycled or surplus. The ornate tiles came out of a demolished church. The shelf is more door mahogany. The "Chimney" is of course faux, but it looks good. The framing is 2x4 and 2x6 overlaid with hardibacker. 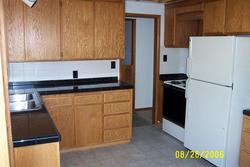 Here is a shot of the kitchen after I finished the work I did there. This room actually got the least amount of work of everything. All I did in here was to install the granite countertops, replace the dishwasher, repair the plumbing, and put a new floor in. I left it to the new owners to replace the drab but functional range and fridge. If I had had more time I would have modified the layout more, but I was getting toward the end of my time there and I wanted to finish things up. Oak cabinets, black granite and stainless look good. 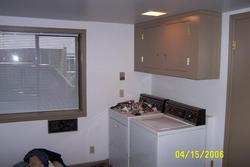 The Laundry area is in the basement, in a corner of the den/rec room. The cabinet, like the cabinets in the downstairs bathroom, is reclaimed bleacher board. The doors were salvaged from a school that was under renovation. This area was a kitchenette when I moved in, but very poorly constructed with the cheapest crap cabinets you could imagine, and dangerously bad wiring. While a bad spot for a kitchen, it was the most logical spot for the laundry area, without really having a good space upstairs for it. A laundry chute comes down nearby from upstairs. 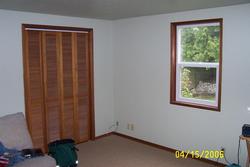 A wider angle view of the master bedroom after I completed it. 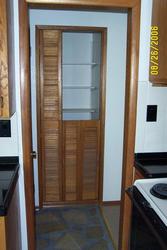 This pantry existed when I moved in, but was 1/2 as wide, and literally only had a piece of 1/2" drywall for the floor. I found that out the hard way. It had been created by framing in a part of the stairwell to create more storage space for the kitchen. While the idea was good, The execution was poor, so I totally redid it. Its floor is raised by about 18" to make sufficient headroom in the stairwell. I moved the entrance to the attic from one of the bedroom closets into here. 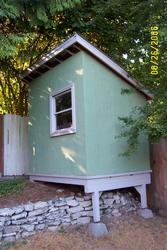 The little walkway I dug out in the backyard looped around to the back corner of the yard where a small rickety shed originally was. That shed was rotten so I tore it out, and eventually rebuilt this one. This shed used recycled lumber from my carport and from a demo'd house. Only the sheathing and roofing material was bought new. No, I did not straighten and reuse old nails. The window came from my neighbor's house. The trim is mahogany slats left over from the original shed. 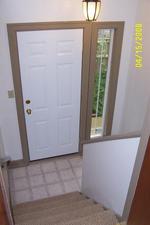 Here you can see the stairwell after I was done with it. It has a new door, and the window was added by me since it was very dark in there before. The wall in the middle used to go all the way up to the ceiling, making it mazelike and dark. There were several overlapping sections of drywall that did not meet up correctly where the basement finishing met the upstairs finish. I fixed all of that as well. 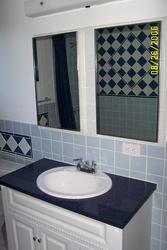 The main bathroom, like the downstairs one, represents a studs-out remodel, again using many vintage fixtures and other architectural salvage items, though in this case the vanity and silestone top were new (close-out) items. I used two medicine cabinets instead of one for more space. Again, all new wiring and plumbing. The bathroom has about twice the useable floor space of the original (tiny) one that was there when I moved in. I accomplised that by taking part of the hallway and expanding into a closet space; then making a new built-in cabinet in a chase over the laundry chute. Yes, I went kind of nuts with the tile patterns. Most of this tile was new, except for the white/speckly blue tiles which were salvaged from an old shorwer stall.